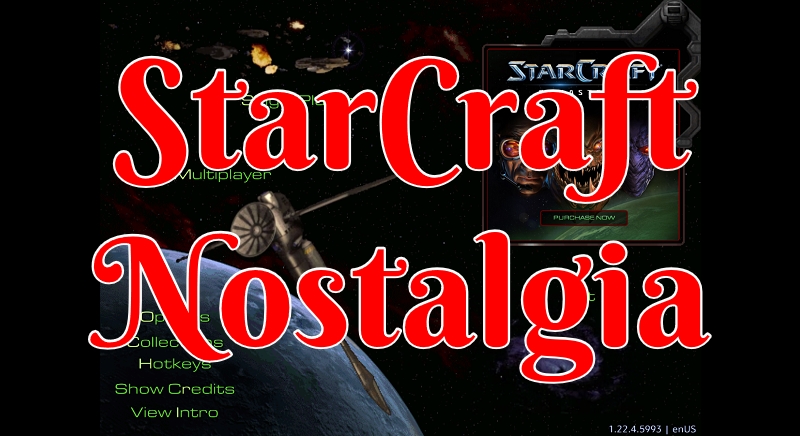 I can almost remember like it was yesterday when I was a kid playing StarCraft. I was over at my aunt and uncle’s house as my parents were visiting them. Their kids were playing on the computers this game I’ve never seen before called Starcraft. You could pick one of three races Terran, Protoss or Zerg and then you play in map gathering resources, defending your base and attacking everyone else. 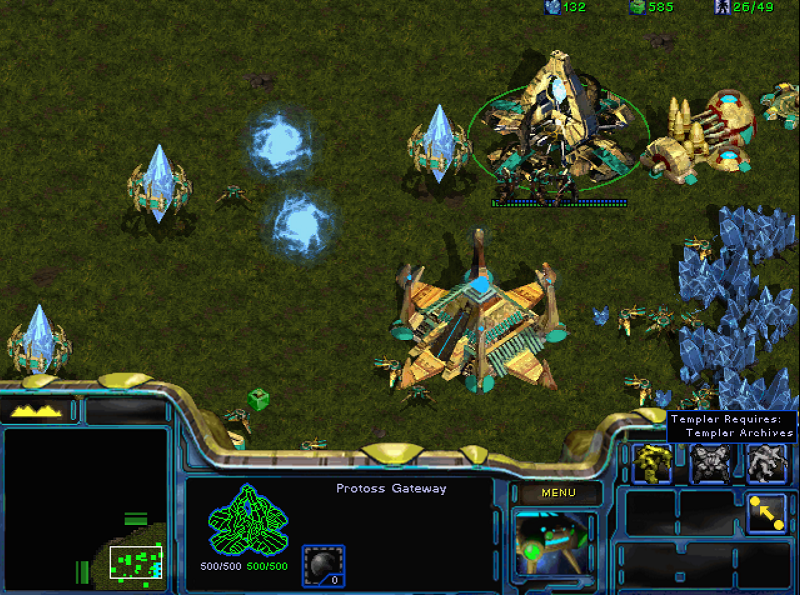 My first ever played race was the Protoss I was quite mesmerized. I watched a couple of custom maps others were playing; before, one of them let me hop into the chair and try it out. After that I was hooked and I had to have this game myself!

Each game always started off really slow you had to take your probes and send them off to gather some crystal. Once you had enough you built more probes and after some time a pylon to increase your max population.

Protoss always has this very interesting weakness regarding the need to power things up with Pylons. I first learned that in my first ever game played as I had my pylons taken out and lost power to all my buildings. I got crushed! I could not get out any more units due to not having any more power and I was just sitting on a massive stockpile of crystal and gas. 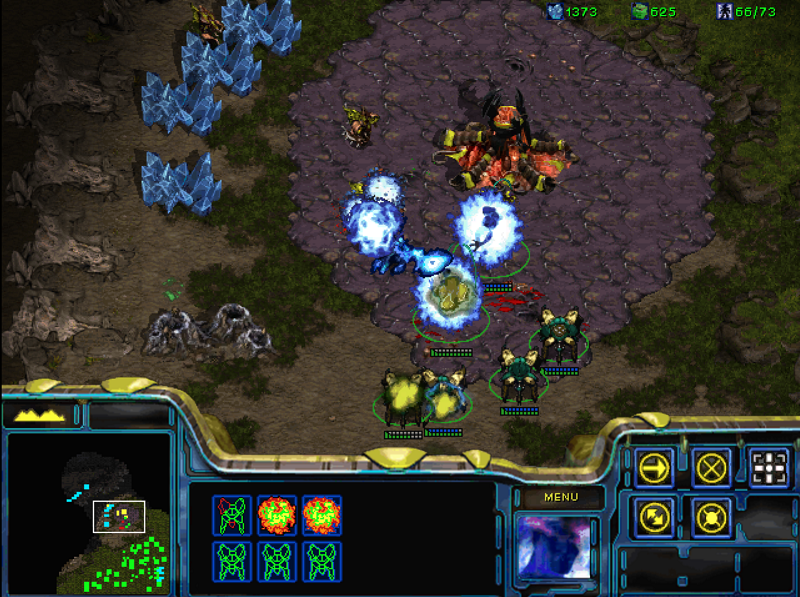 The next game after that I discovered the high Templar unit and their ability to merge two together to form an Archon. These massive powerful beings that zap thing with electricity! I was a kid and this was better than peanut butter and jelly! I amassed a giant army of these and zap my enemies out of existence. Thus getting my first taste of victory playing StarCraft.

After that, it was time for someone else to play and we took turns back and forth. The hours went quickly and before I knew it I was hearing my name called and being told: “it’s time to go home.” I begged to play one more game and after that, I gave in and got into the car for the ride home.

I didn’t know it till we got home but they had given me an extra copy of the game they had. Somewhere in a box I still have that cd and a key of which I don’t have a clue where you would use it. The cd itself over the years of being played had a giant scratch in it. This was somewhat heartbreaking I could no longer play the zerg and some of the maps stopped working as well. 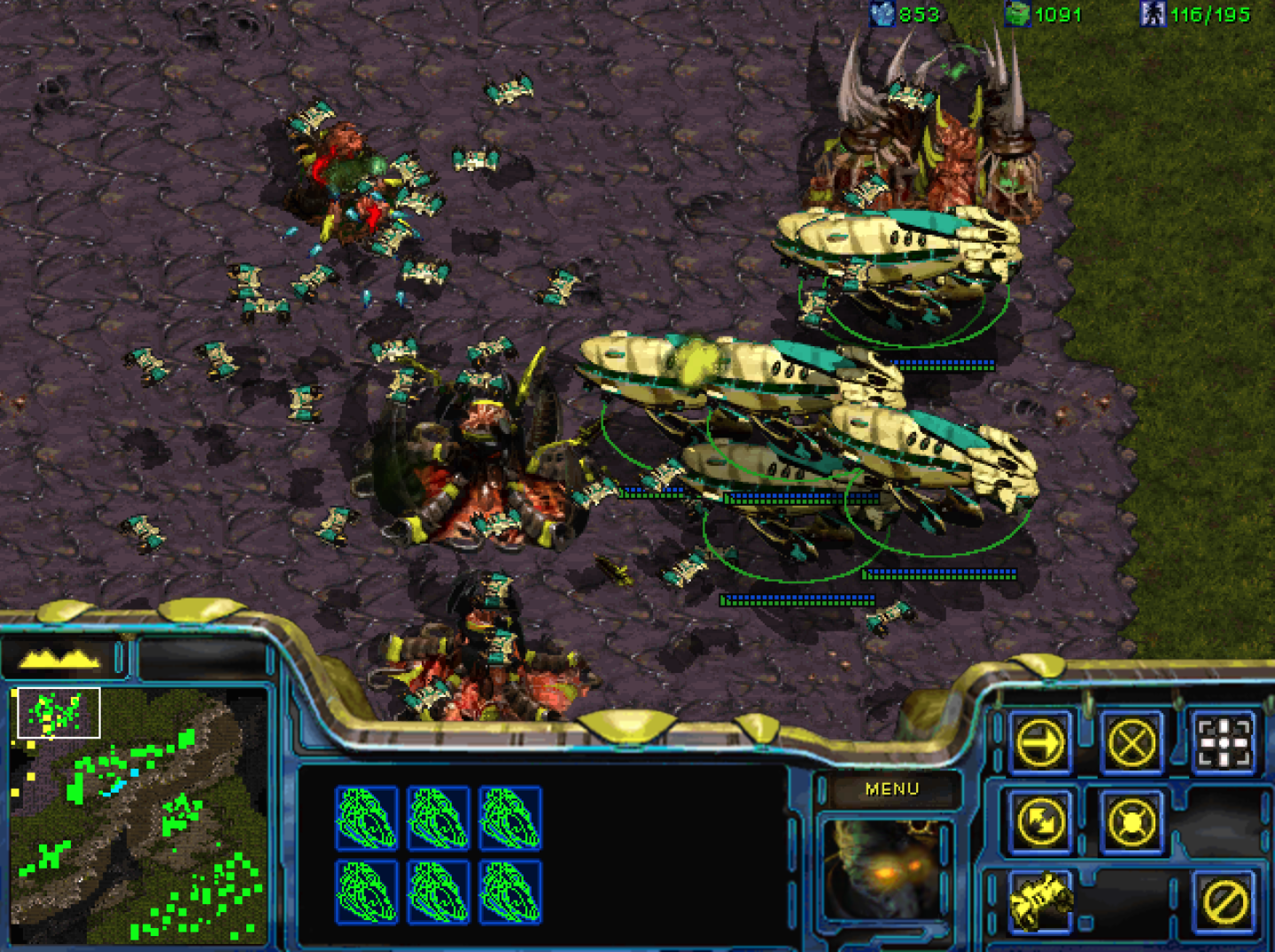 I did over time move away from playing Archon along with cannon rushing and a bunch other things. I discovered the carriers and well once you see a full fleet of them swarm in to devour as if they were Zerg entire basses you never go back! Ah to the glory days of carrier rushing!

Protoss ended up being my second favorite of the three races to play. Who knows how many countless hours I put into playing them. I just loved the game mechanics of the probe only needing to be there to start construction and then being able to move to other tasks while it was being built with power. This along with cannons, and those power melee zealots as well. 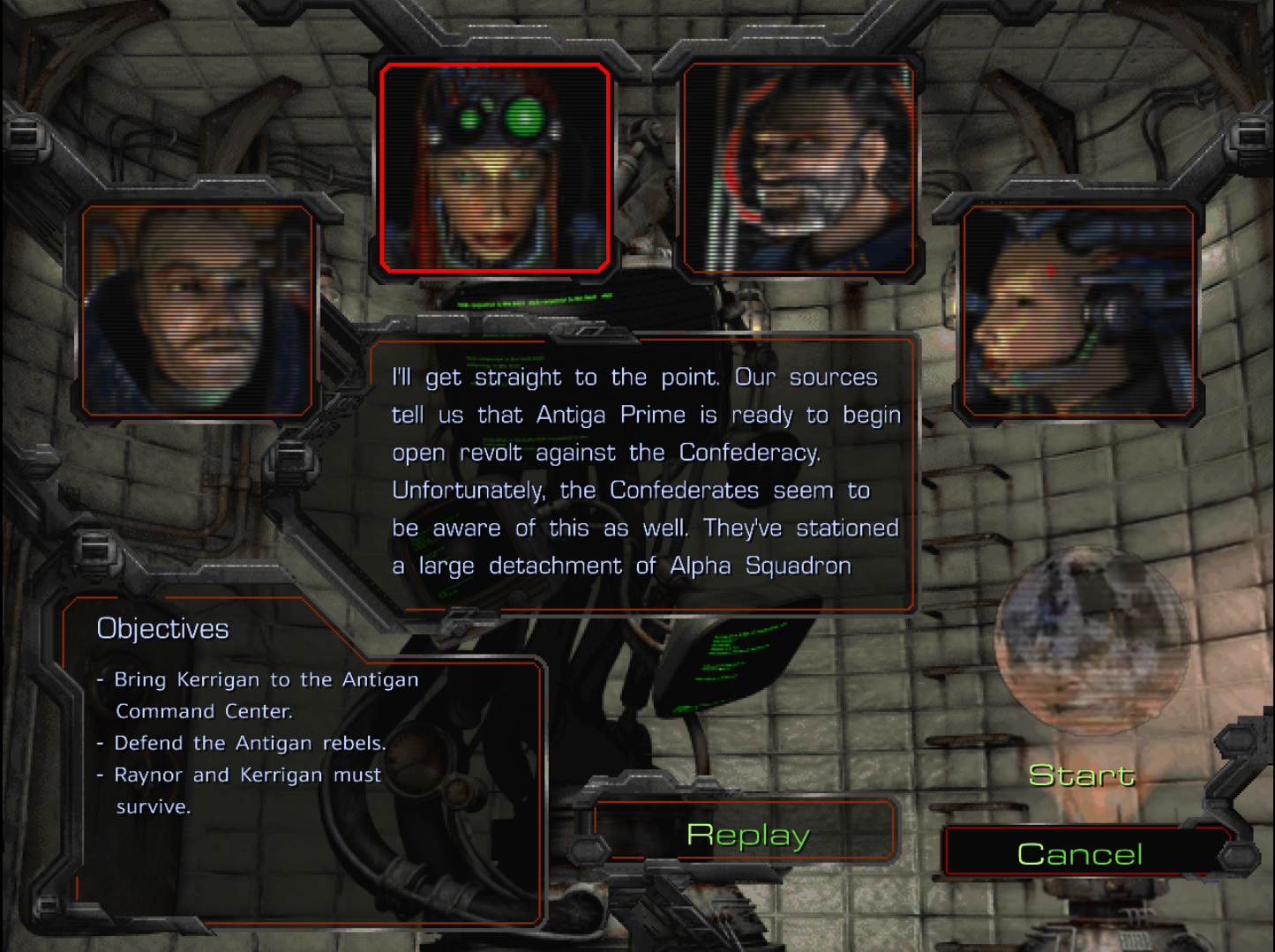 Once I started to play in my own game you needed to play the Terran campaign first for unlocking the other races. This is where I learned a lot of the basics to the game as the different missions took you through the motions of getting a proper start, using different units and enjoying the storyline as well.

In my recent play of StarCraft, I once again went through some of the Terran campaigns for the nostalgia. Each mission you get a briefing with voice acting and they go over some backstory, what you needed to do and there was always some drama as well! Turns not many got along with the Federation. The game also gave you the skip button in case you had played that mission before but I always liked to re-watch them. 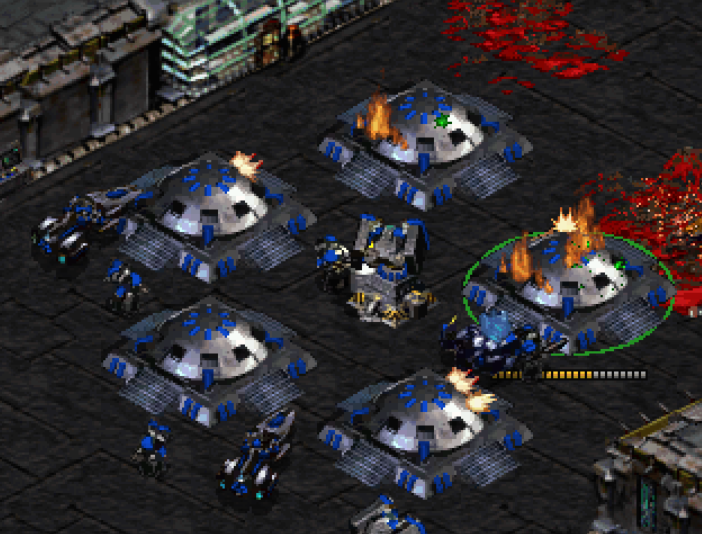 One of the missions I really loved where the base defense ones. You had to survive for 30 minutes with waves coming in every so often. While some of these games took much longer to play and if you lost at the end it sucked. It was great trying to come up with base defense and seeing how it played out. I would build bunkers and missile turrets. In the later ones sieged tanks at the ready to take down whatever we faced.

There were a bunch of other mission types as well: build, gather, kill, and protect certain units. They even had once where you did not build a base but had to go into a complex and steal information or sabotage it. This presents an interesting challenge since more times than not you could not just replace any units you lost. So those taught me I needed to micromanaging my units and have the damaged ones sitting in the back. 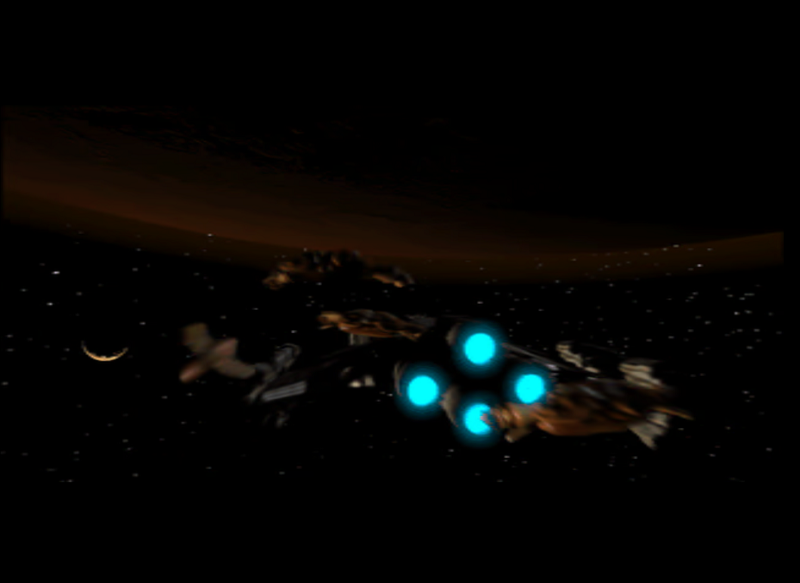 One of the things Blizzard was always known for doing an amazing job was creating these breathtaking cut scenes for the player to enjoy watching. Many of the missions had one to watch some of them might be short while others were quite long. While it’s great the game is still playable even to this day these did not hold up to well to the passage of time. That screenshot does it no justice! While there is a remastered version of the game I did not play that as I was looking for the good old days no matter how mud they look today.

As I got deeper and deeper into the missions my gameplay turned into siege tanks! Yes, I’m a dirty siege turtling Terran! I have been one since I was a kid and even later on when StarCraft II came out. At least when I was a kid I had the time to spend all day playing a single map moving my siege line 3 tanks at a time up. Build missile turrets to counter the fact they can’t hit the air. Maybe build some bunkers as well if it was a hard area or to backstop enemy movement after I had moved up. Nowadays I just don’t have the luxury of such time. That’s one thing I do miss the most.

My Favorite Map-- The Small Divide 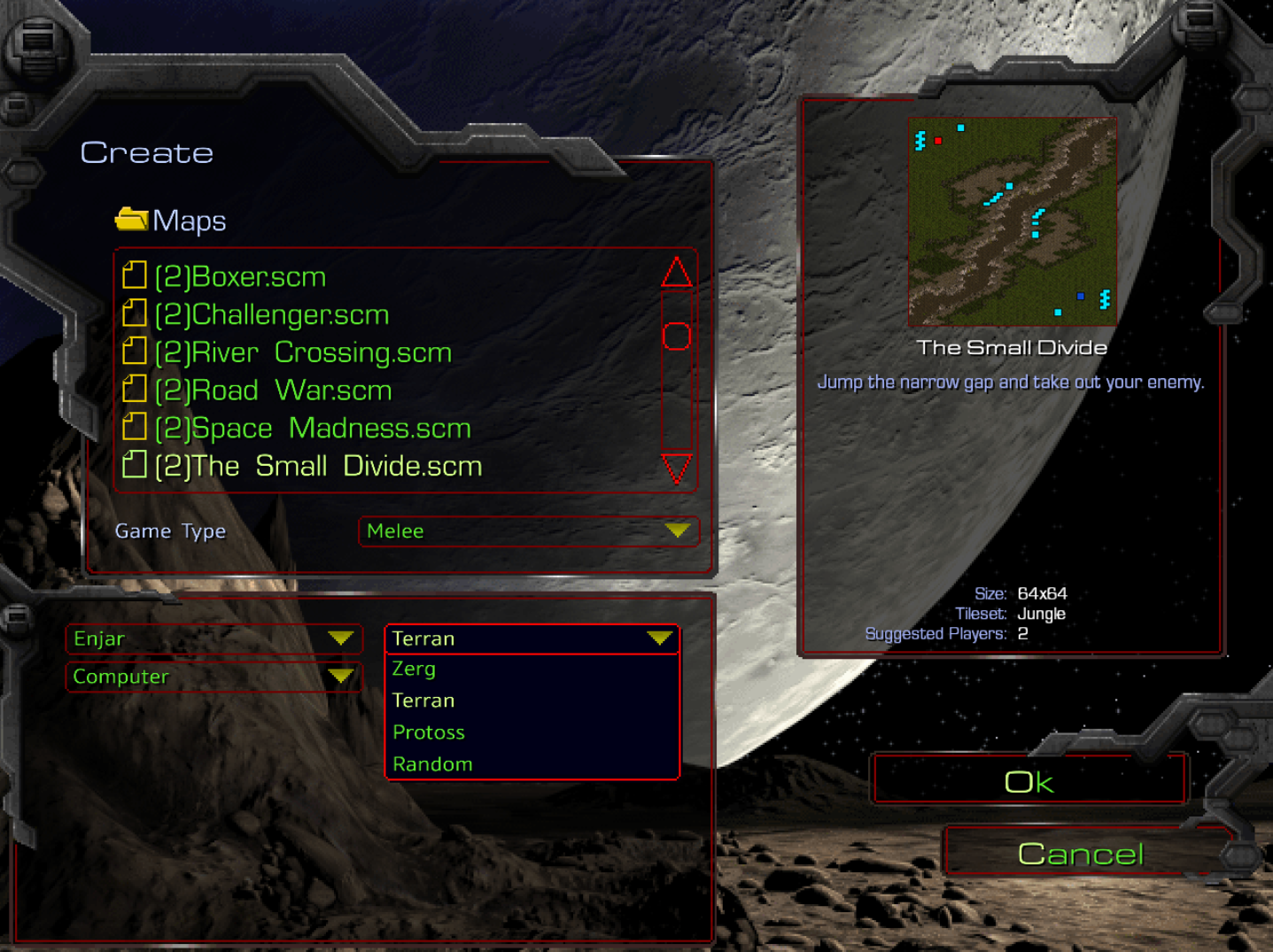 While there were a lot of maps to play from 2 to massive 8 players or AI I always loved this small little 2 player map. I also always played against the AI when I was a kid and did not get into pvp until much later when I started to play StarCraft II.

The Small Divide itself is quite a simple map. Each player has their own little area up on a cliff. This means you have some time to build to yourself without the worry of any rushing. You need to unlock air units to even get over the divide unless you were going float over some terrain buildings (which I’ve done before.)

Down from that cliff, you have a second area that is on its own ledge. This gives the player access to two different farming areas for crystal and gas. Due to that fact, it does not take long before you run out of resources and you end up fighting for control over both ledges trying to keep the other player from getting more resources. 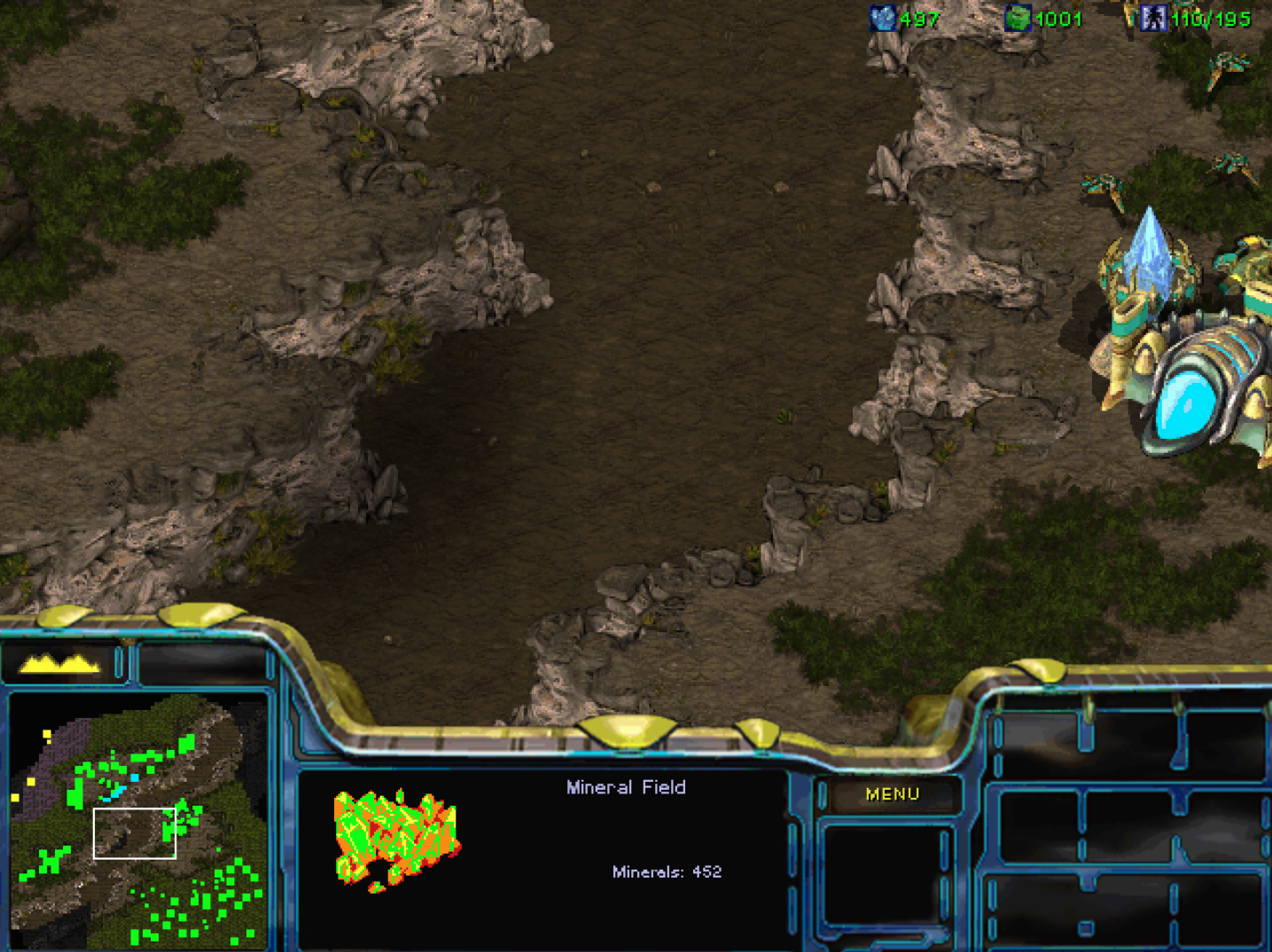 After a while, your main base runs out of crystal to farm and at that point, it’s either game over if you lost your second site or a victory once you mount a big enough army to be able to transport units over to the other player's side and take out any air defense they might have.

I must have played this map like one thousand times. I’m not quite sure why I did not find others I enjoyed. I did love to build massive armies and make it to more end game units. In this map, you had the very limited ability with how few resources were available to gather. Either way, I had a blast replaying this one a few times last night!

It’s odd I can’t remember the days I stop playing I guess it’s like most games. I don’t even remember what game replaced it. Just one day I was no longer playing. I had since played StarCraft a number of times.

There was this one time many years after I had to stop playing that a student in my middle school had discovered StarCraft had not only been installed on one of the computers it was playable! So we turned off sound on that computer and tried to play it “cool’ while different students took turns playing a little bit before going off and working on the assignment we were supposed to be doing in the computer lab.

It turned out the teacher loved playing the game as well. As we were leaving the computer lab I recall something along the lines “I hope you all got your work done before having fun.” Grownups playing video games? Why that was crazy to think about!

Over time I got back into the StarCraft world when the second one came out. I even tried for over a year of playing way too many hours a day trying to get into the esports world of it. While the game was massive in countries like Korea it was not so much in the western world. At least not like it was there. Why those players where celebrities! They also crushed the daylights out of our western folk. There where even rumors they had an entire tv channel dedicated to StarCraft!

There were a couple of times I thought I was going break into the scene. Over time I went from being a Diamond player in StarCraft II down to a dirty bronze. Perhaps I’ll fire it up once more when I get some free time and re-visits it.

For those wondering you can, in fact, play for free StarCraft I. Back in 2017 if I recall they came out with a remastered version that they are now selling as well. As such the older non-remastered version is free to play with the expansion!

Screenshots were taken and content was written by @Enjar about the game StarCraft.