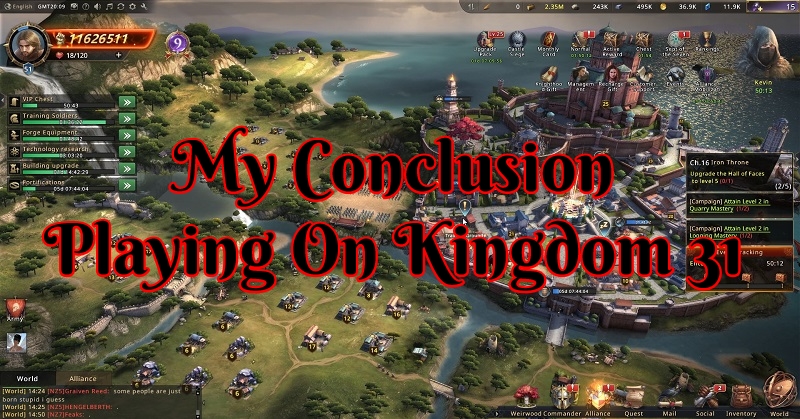 I had plans to play this game for a considerably long amount of time from the coming months when there would be kingdom vs kingdom. Almost with nearing maxing out my own city and being one of the top players a year or longer down the road. When it comes to a lot of games out there people put out the short term content but rarely never stick around to give you the full picture of how it’s like to play that game for a very long time. So that in itself was an intriguing idea I had for this game.

To be able to do this required quite the dedication of time. While I did end up spending $30 in the cash shop for Game Of Thrones Winter Is Coming that it really a drop in the bucket compared to what many spent to get where I have. I also moving forward had set myself up in not really needing to cash anymore. 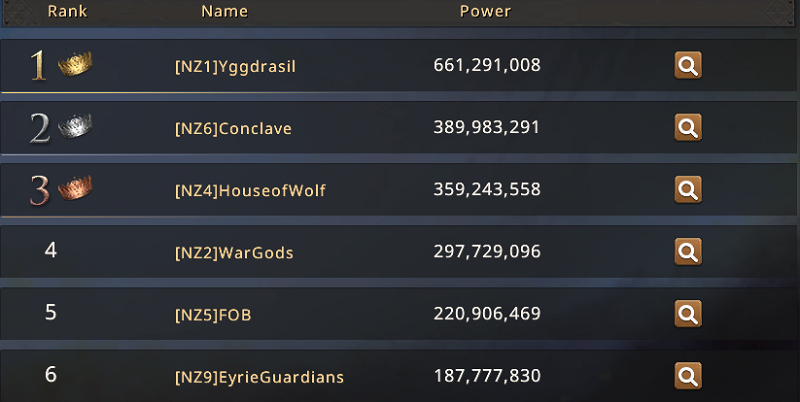 The group I was in on Kingdom 31 had formed this massive group and every alliance that was in it had the guild ticker of N# or n# to denote they were in. This should, in theory, make it easy to know who not to attack. Each guild can hold 100 players and there was N0 to N9 and a bunch of sister alliance with a smaller n as well. So we are talking a lot of players even if most of them were not max out.

On top of that, they even went off to brand new servers and took control of them as well. These people are setting themselves up for quite the farming opportunity with little risk by trying to control many kingdoms.

To do so they always were quite controlling and at first, I did not mind so much. In fact, if you want to dominate a game like this you need some very strict rules. As time passed just due to a large number of people involved more and more rules needed to be added in. These I never had any issues with as for best practice I was already doing them myself.

However many did not and when things are not running 100% that tends to create issues. People for whatever reason could not understand to not attack other alliance members farming resources so troops were getting lost by the attacker. Someone would see another person heading to a resource so they would speed up to get their first and not lose troops and then blame the other party since they here shown as the attacker. Rather normal stuff for a game like this.

As a result, this meant a discord channel to try and resolve. Endless spamming of the everyone mentions tag over the slightest things. Sometimes you would get back and you might as well go get popcorn. Someone lost oh my god 200 troops and there was going be hell to pay with them using the everyone mention.

On top of that, anyone who did not follow and enlist into this group ensuring this kingdom could be number one was meant with brutal force. They would hunt people down and force them to quit. Which I expect to happen to me except I will already be long gone.

One of the more harsh things about Game Of Thrones Winter Is Coming is the fact that if you lord gets captured and you are higher enough level they can be exacted. You lose all your lord experience and it could take months or longer to recover since you no longer have easy and quick quest experience to rebuild. Now you can keep your lord safe in a bunker but he can only remain there for 12 hours at a time requiring logging in at least twice a day to ensure safety. They can also be ransom and it takes a while before they can be killed so it’s not like you can’t try and rescues them.

Along with keeping your lord safe, you needed to log in a few times a day anyway to do the following to maintain being a top player.

Now not all of this had to be done all the time but if you wanted to be with the best it’s a good idea to show up to an hour and a half castle sieges. Be a little active in discord, and show you are a team player by pressing the help button, burning bars of resources and so on. As you can imagine this was a considerable amount of time spent weekly to keep up.

I’m not the first one to end up leaving either. Even in the early days, it’s always been bend the knee or you will be forced out. This has caused a number of high profile players on Kingdom 31 to get bored and leave. This is what they want as anyone not singing the song and bending the knee is considered in rebellion and needs to be hunted and dealt with.

For a while, some of the banter in discord I thought was just friendly jabs at each other. This game is going take months to years to play out on just this server alone. That is expected to happen with that much passage of time. Expect that was not the case for some and it’s often hard to determine if someone feeling like they are being mistreated or bullied in a discord. This had lead some dedicated people to leave ones I thought where part of the main group on other servers. Who knows really how many servers they are trying to control all at once. I know I said know when they were looking for people to help take another. I did not want play this game 24/7.

Some have also left under silly reasons which I think was their way of trying to be nice about it. The best one has to be “I can’t join the castle siege due to the time it’s at.” When I first started it was around 3 pm and the next one will be 8:30 pm. It’s slowly getting later and later for me. You also were not expected to show up to every siege so it’s kind of odd how in a few weeks it will be a different time so it’s not that big of a deal.

At some point, a game just stops being fun and you just had enough. Since there is a risk of higher level players like myself having enough and wanting to attack the server I consider it important to check in when I could on discord notifications from that server. Expect everyone and thee mother spams mention all day long. Which drove me a bit crazy as almost every time it was a waste of my time to go and see what is up? 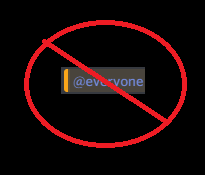 This resulted in me making this image and speaking up that the mentions spam is being abused to the point many are done with the members who cried wolf. Many at that point had turned off or muted the discord and I got tired of my time being wasted.

They then promoted someone to try and help and I joked he should just ban them all.

Well, the leader was not too thrilled about my antics anymore. Strip my discord roles and told me to shut up. Guess he thought I’d bend the knee again and be a good boy. Man, I spent so much time in this game. I tried to join in on everything I can. FUCK YOU.

As soon as I left I started to get a number of in-game mails from my former leadership. Why they even reinstated my discord roles for the time being without me saying a word. Not a single word out of my end.

Once I teleport out of the hive and do not reapply they are going have to deal with me. A bounty reward will be offered to the first person who finds my location and many times more as I relocate. They will wait for my castles shield to fall and then move in for the kill.

I have become quite skilled in my time. I could for months cause total hell. I know how the game works. I have the resources to very cheaply cause endless trouble for this kingdom. I’ve also proven I’m one hell of a dedicated player and know how they operate. 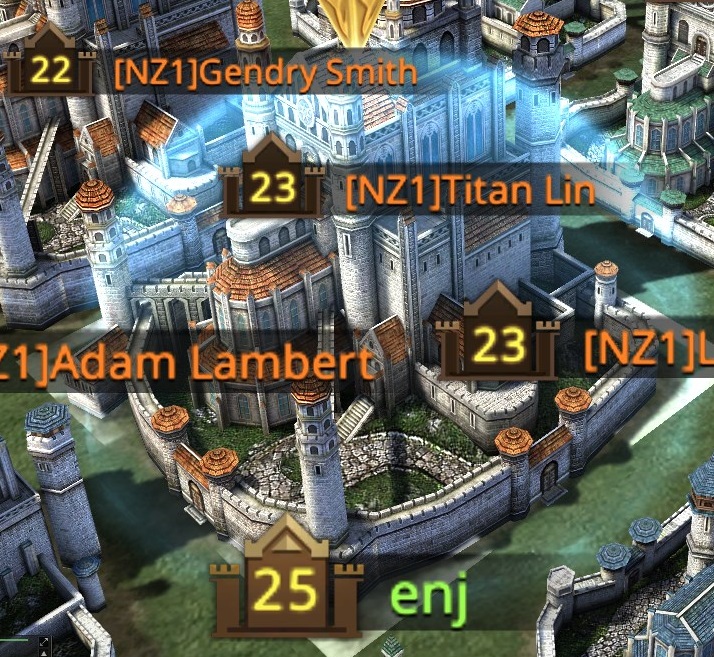 So while the thought of having some fun and waving the middle finger a few times sound fun. I’m just going troll a little bit and be on my way. Unless I know they will find this post and I’m now playing mind games. I am a former Eve Online player, after all, we carry out war in so many different ways. Let them waste some time and resources and move on with my life. This should not take more than a couple minutes a week and provide some last entertainment out of this game for me. They might even have to put people on the watch for days just in case I try and do something which is hilarious.

If anything funny happens I might post it on twitter. Otherwise, I’ll just get some popcorn and enjoy my last few hours before they force my account to bend the knee and cut off my head. What a mighty Game of Thrones conclusion that is!

It’s only a game and it’s scary how much more time others are putting in that I do. When a game stops being fun and causes you to put up with bull it’s time to move on. Guess I did not shut up after all.

Have an amazing week.

Other Game Of Thrones Winter Is Coming Posts

Screenshots were taken and content was written by @Enjar about the game Game Of Thrones Winter Is Coming.