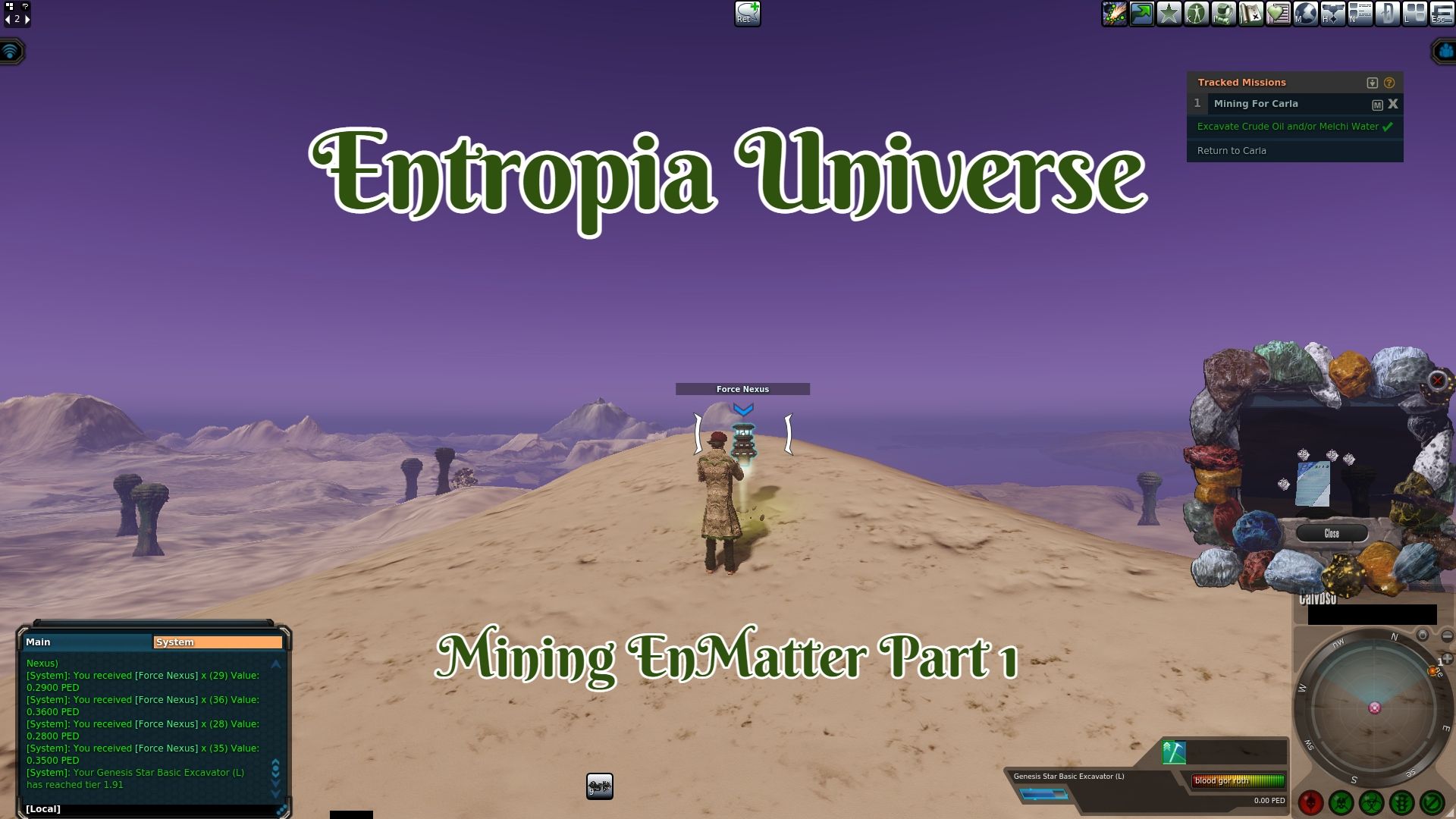 I was not quite sure what I was going to be doing for the day. I was running around checking out a few locations for some future plans. I was also dropping random EnMatter probes just in case anything ended up popping up that I found interesting.

EnMatter itself is one of the types of resources you can go mining for by dropping probes. It's cheaper to mine for than Ore and it's what I started on when I first got into mining. I had been itching to go EnMatter mining for a while now. My last mining run was on Ore.

While the smart player would go look at a bunch of data points on the right website and study the market so they could work out the best place possible spots to mine. I would rather just do it the old fashion way of dropping probes and find that information out for myself. 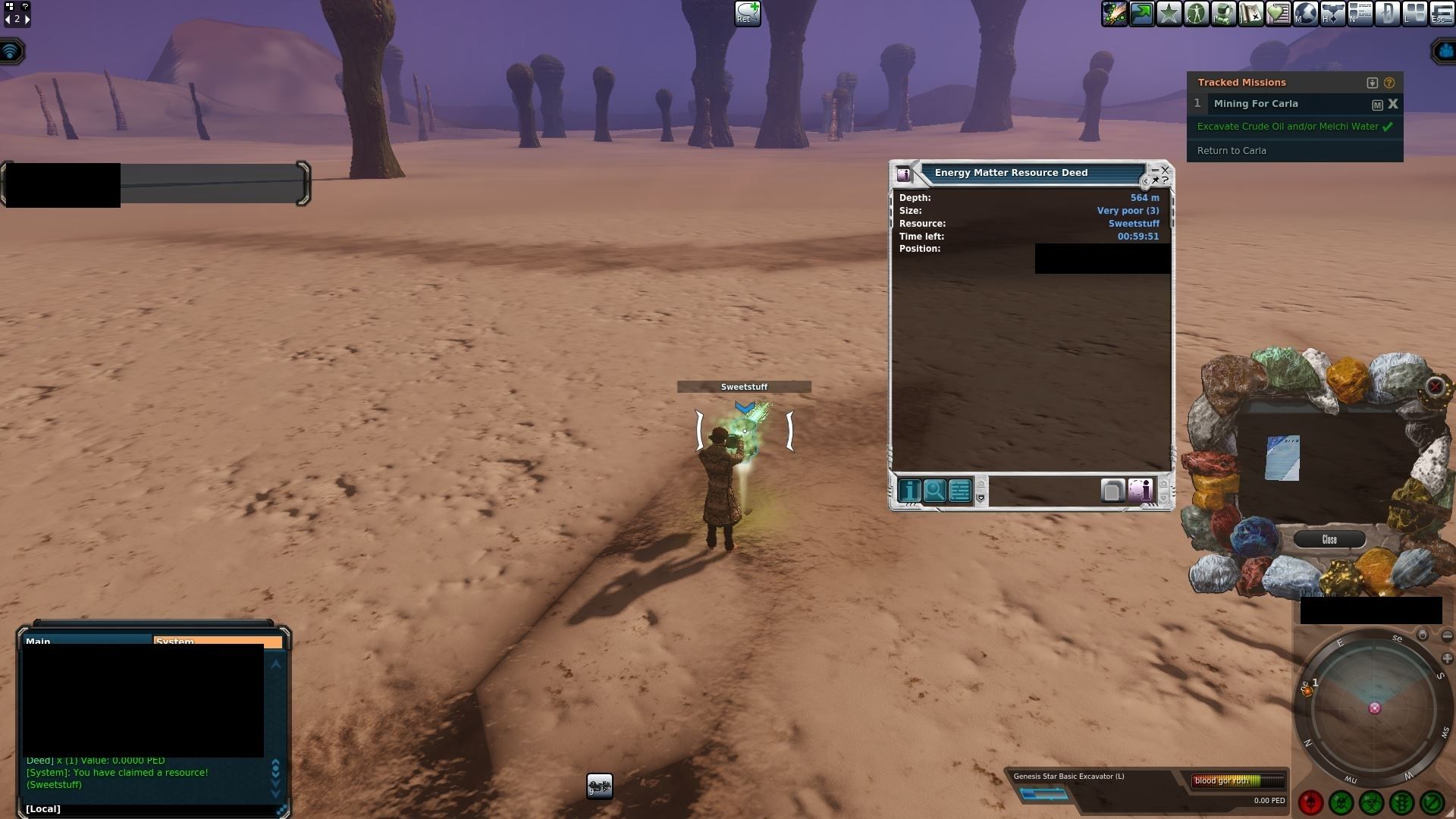 One EnMatter I do find myself needing is called Sweetstuff. It is refined with fruits to make Nutrio Bars. I just knew the moment I dropped this random probe and got a return back of the stuff that I was suddenly going on a mining trip! I have been told Sweetstuff tends to like mining finders that can go quite the depth. It’s also not uncommon for people with F-104 finder or lowers to struggle to find any at all. While my F-105 is not perfect and something like an F-106 would have been better for the job. I only have an F-105 and it would have to do the trick.

While Sweetstuff does not have a crazy markup on it. It’s a lot better than most things. I also needed it and there is not much on the market. I did however suspect I would not find large amounts of it at least with the finder I have. Something harder to get a lot of tends to drive the markup of the price of an item.

There is just something thrilling about having a new location to scout and mine. I don’t have any personal data points about the area. I have no clue what kind of monsters I could be facing. If there will be other challenges in the area I’ll have to work around them as well.

I did not even know there would be an owned land area out this far I was a bit shocked when I got the message for heading into one. Since I was not looking to pay a 4% tax for mining on owned land I make sure to go around it. The area itself was mostly void of creatures to run into. There were a couple of packs of them but they were not crazy dense. For the most part, they were a creature that has a low aggression range.

While that was not the case for all the creatures I would run into this mining trip. That information is quite important as many players will not even go near anything that could attack them. The only downside is the creature in question deals high electric damage and I don’t have any protection from that.

I’m also the crazy kind of person to drop probes in the middle of an Atrox pack as I have done in the past. Naturally, when doing that kind of stuff you tend to get a hit. Over the years I had developed quite a few strategies for getting my mining claim out of bad situations. So something like this was not going to deter me. This area was also nothing like that in terms of difficulty. The game also has a built-in summon claim feature. As long as you are close enough you can summon the mining claim to you. As you can see there is a decent amount of distance you can have.

The hard part is waiting 30 seconds and hoping the creature does not move right where you are trying to summon the claim. You can bet that happened this time around. Since I could tank one of these creatures anyways and it would not take long to extract the EnMatter I decided to just go for it instead of trying to move the claim again. Once I had a couple of rows of mining done anytime I hit trouble stops such as the one above I would just run the creature over to where I had already mined. Then I would summon my ship and be on my way.

More times than not though I could just weave my way in and out of these patches of creatures. This is a great skill to learn how to do and use the radar to stay far enough away to avoid unwanted attention. That did mean not all of my probe drops were exactly where I wanted them but if there is a place people will avoid mining it’s in the middle of a pack of something unless you are dealing with a professional.

This area also has quite a few mountains in it. Making it not an easy level ground to mine on. I did a couple of times spawn my ship and go up and down the sides of giant hills that I could not walk up.

Back in the day, I would have dropped a probe while sliding down a mountain. As someone who has been known to get mining finds that way. There is a chance it lands in a spot you can’t just walk up to or even summon. I did not feel like going through such pains to mine something like that if it occurred so I opted to not do that this trip.

Everything else I found in the area outside of the Sweetstuff had some bad markup on it for the most part. I found stuff like crude oil, force nexus, acid root, and growth molecule. The good news is I might have a use for one or two of those EnMatters.

It is a bit of a shame I already have enough oil to last me quite some time. If I had known I would have an itch to go EnMatter mining I would have avoided buying a decent amount of it at the auction house when I started playing again. At least I know I can sell it in small batches for a slightly higher than average market and it should sell. The other EnMatters I’m going to have to do some further research on. I do know certain refining combinations can yield some higher markup results. I have been out of the loop for a while and if I had to guess since most of these sell for so little I’m not dealing with anything like that.

The area I was in was also PvP. Thankfully it was not loot-able PvP as even I tend to stay away from mining in such areas. Since there are a lot of players who won’t have anything to do with PvP I was not expecting to find anyone out here.

That however ended up not being the case. During the middle of my run, I noticed a player so far off in the distance I could barely see them before they would fade away again. I doubt that person noticed me or even cared that I was in the area if they did.

I did manage to mouse over them once when they did reappear back within my range. I wanted to see if I could make out if they were using a finder for mining and if they had a title. It was a yes in both cases.

A lot of players like to wear the highest profession title they have even more so for the activity they are doing. The other player had one for EnMatter. It was not hard to guess that he was then there for EnMatter mining for Sweetstuff.

While I did not know what kind of finder he had and if I recall his mining professional title was not that high. He could have been using an F-105/106 finder. If I was in an area where people would be mining at different depths or we were mining for different things (Ores vs EnMatter). I would have stayed around and countered my mining run.

We both were also quite the distance from each other. Depending on how perfect the person was trying to mine and how skilled they were at it there was a good chance we were both an hour and more apart from each other. As this area had some quite long areas to run down.

I did not find anything great in this run and once I noticed another player it made me more than question how recent the area had been in mind. I did not feel like taking a risk of mining further. That is the issue when something has a higher markup in an area. It tends to attract people. For all I know, there could be even a better Ore in the area and that was what the person was after. I only ended up finding quite a small amount of Sweetstuff. I more than likely do need a Finder F-106 and those are hard to come by and tend to go over 1700 PED. Only about nine of them have even been sold at auction over the past year from the looks of it. Either way, ta F-106, is a bit over my budget for investing in mining for a finder.

My other option would be trying to tier up my F-105 and putting depth enhancers into it. Unlock tiers can get costly and you have to level up the item for it as well which takes a lot of using it. It would be cheaper for me to just find an F-105 that someone has already put a few tiers into and wants to sell it quickly. 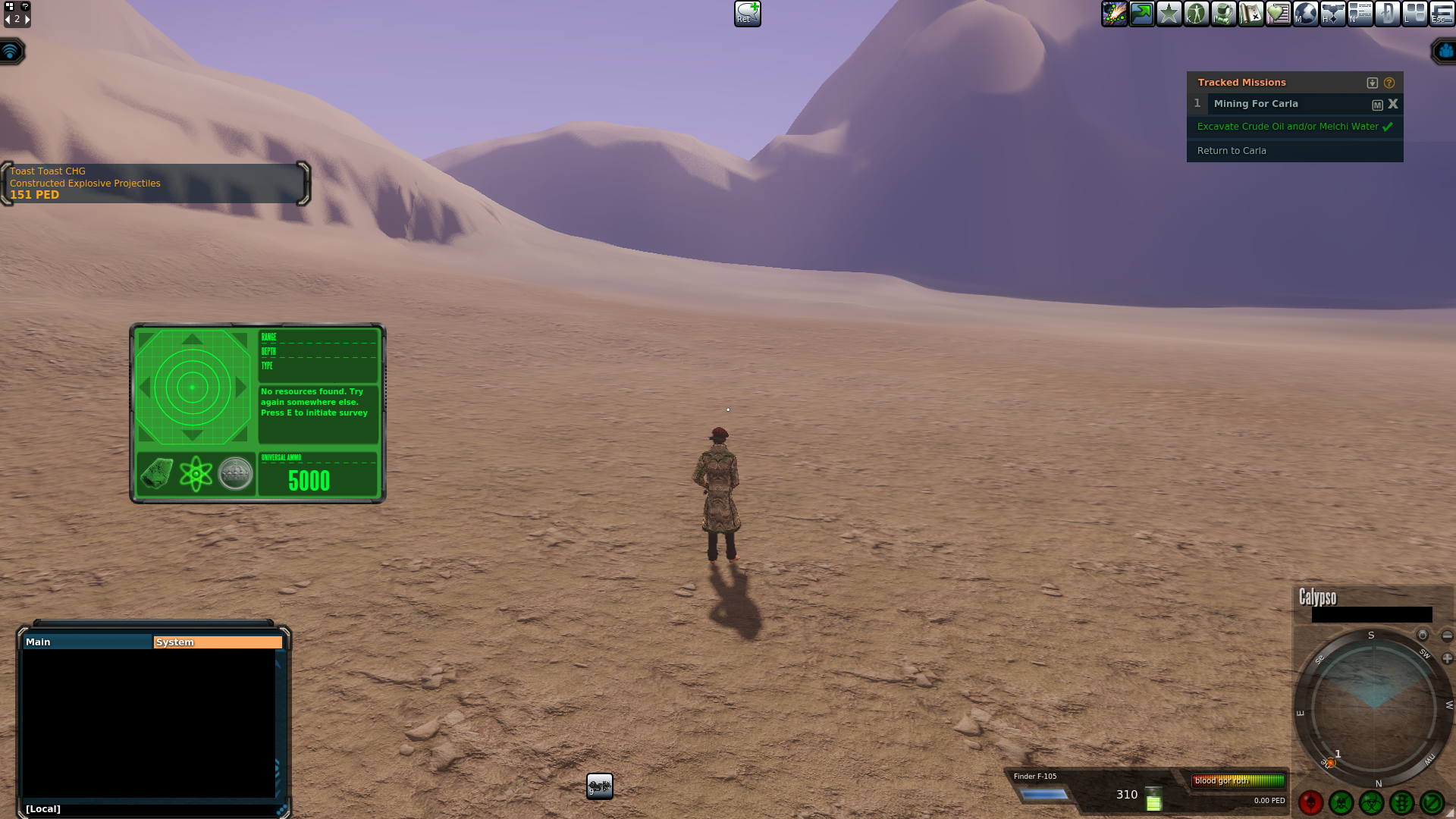 While all my finds were quite small and most of what I did find had low markup. I ended up lucking out and being up a little on the run. This I was quite shocked by. I will be doing a lot more random mining in areas I have never just for the fun of it in the future. I do enjoy just randomly finding stuff on my own as you know never where an adventure takes you.