One late night I had quite a lofty thought pop into my mind. I wanted to do all the missions on Calypso and along the way work on getting the first few ranks of quite a lot of creatures. While up to this point I had done quite a few missions most of them were ones I had picked a while ago and never got around to running.

Calypso I is however quite a massive planet. So I thought how could I accomplish this? While I’m never the biggest fan of wikis they can be a great starting point. While a lot of the information on the one for Entropia Universe is outdated or even wrong. It would at least help direct me where to go-- sometimes.

It also turns out the wiki has an entire section that lists missions that you can short by the planet. I already know a lot of the missions that are no longer in-game often start with “iron” or “gold” since they have been replaced by the codex system. Other than that it would have to be a trial and error to find what is out there. 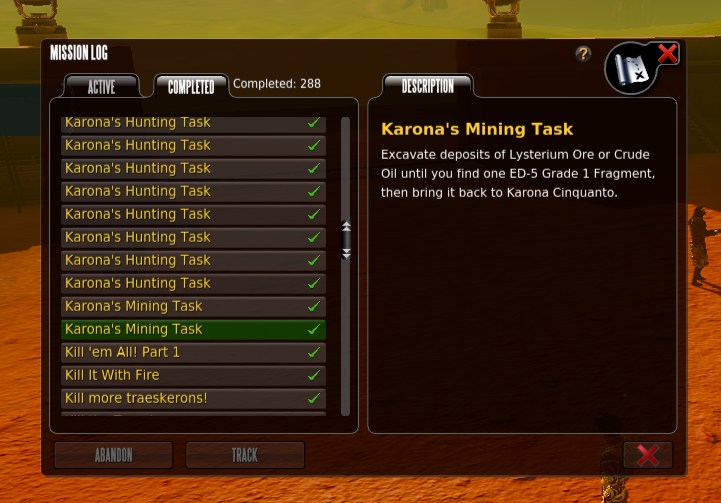 I would not have to run to each one. Since I’ve spent years grinding away on Calypso I had what I can only assume is well over 200 missions already done on the planet. I would first need to cross-reference my finished mission tabs and all other missions. There was also a point in time when I would come across an NPC that would not talk to me. Mad Prophet, for instance, wanted nothing to do with me and from my best understanding, a lot of his missions have been removed. Moving forward anytime I had a mission that had him listed as the starting location I would skip over it.

I ended up hitting a rut for a few hours where every single mission or NPC I was looking for was not to be found. So many missions have been removed or replaced over the years. Not to mention some things I can only assume have broken at some point with how old the game is. This was not all bad. I ended up finishing off a massive string of Karon’s missions. Each one had you hunt or mine till you got a special fragment drop. You could not get more than one mission an hour from the NPC so I would just check in every hour for my next mission. Once you have completed enough of her missions you would be given access to an instance to solve a puzzle. I have done her lowest puzzle in the past. This time around I managed to get through her mission chains till the last instance that I’ll have to come back to again and try and solve another day.

I also had some missions I had yet to fully finish. Some of them I just tired of and would sometimes try and work on them when I can. More times than not they included killing a large number of creatures in an area. 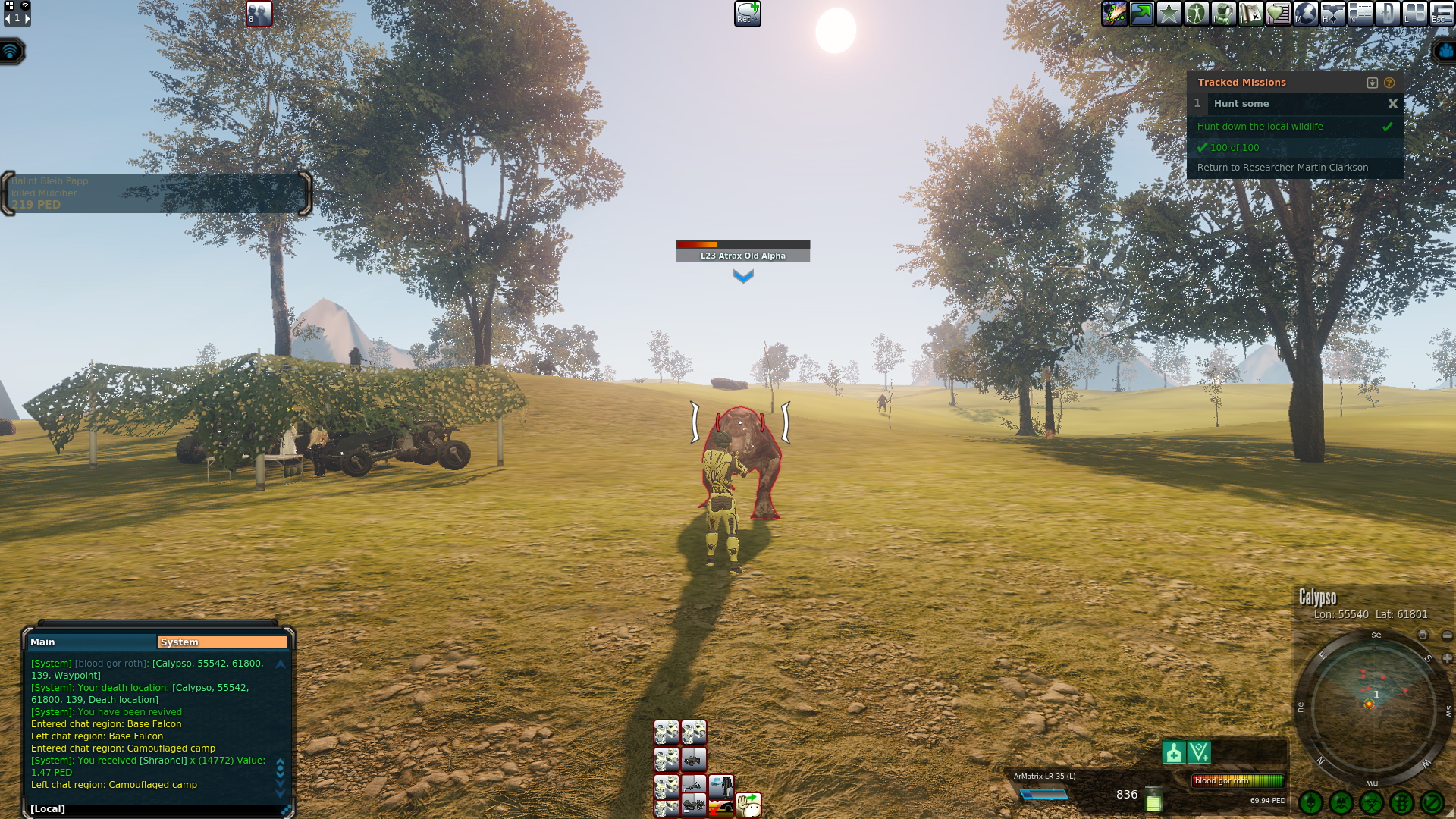 This Atrax Old Alpha for instance back in the day would have given me quite the challenge. Thankfully I have a lot more health and evade skills. Add in being able to take a large chunk of its health before it even gets to me. It was not too bad. Granted this one did kill me. 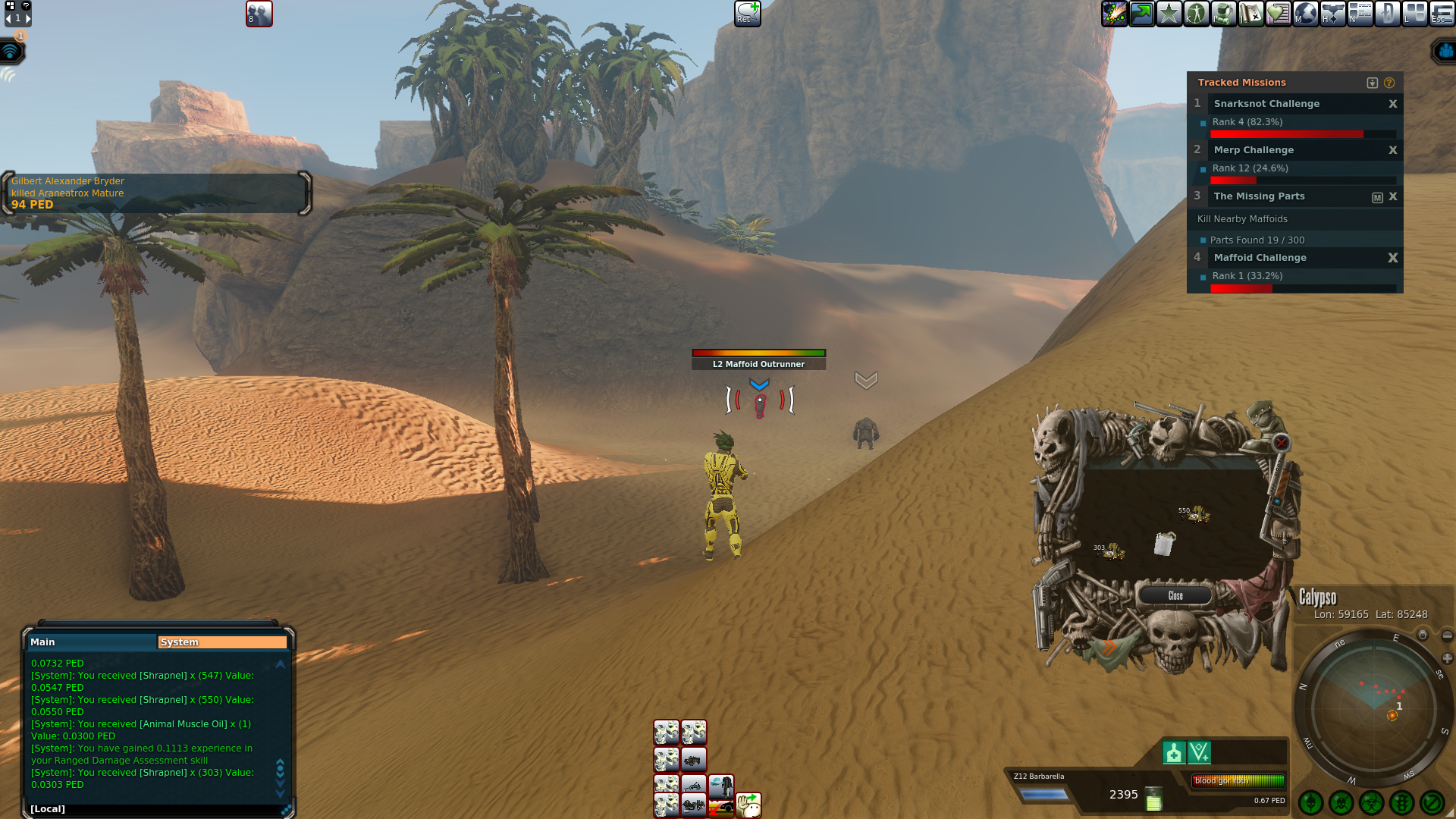 A lot of the missions were also very low-level stuff. It was either something that got added in after I took my prolonged break from the game. Or it could have been a creature I could not stand to hunt anymore and found out I should have been grinding them the whole time with a mission.

Nowadays being able to pair codex rewards and a mission for something gives me quite the incentive to go out and grind. Even the small stuff I could 1 shot with my bigger guns I did not mind using a smaller gun and not wasting a bunch of ammo.

There was some instance where I would happen to run into a location for an NPC. I can’t be certain if I just had bad information or if the NPC got moved to its current location from somewhere else. Anytime that happened I was just thrilled to have another mission to check off the list. The game even has a fight club mission. Where I’m trying to access an arena and this one NPC sure seems to be flirting with my character. She wants me to go off and kill 100+ a creature that is not even close to this location all in an hour.

It evenly leads me to an underground fighting ring. Where waves of Shinkiba would spawn and each wave would have a higher maturity of the creature. I was doing fine for a while till I could no longer handle getting hit by a few of the higher-level Shinkiba. I had finished the mission by then I moved on to doing something else. A lot of the missions I ended up finding were just basically going out and finding a location or fetching an item kind of deal. This one, in particular, had a special twist added to it that if you died you failed the mission and would have to get it again.

It turns out some nasty high-level robots are lurking around that will rip your guts out and stomp on your head. Not to mention make you fail the mission. I suspected something like that was going to occur and was extra careful getting into each area. For a while, I was trying to keep track of everything in an Excel sheet. I was including what missions I had done already. What missions were missing or seemed broken. Along with what missions I was missing a requirement to get or had some reason I could not finish them. After hours of doing this, it felt like it was just slowing me down and I ended up dropping that idea.

My night ended up being as random and all over the place as this post has been. There were times I came into areas where I could tell I would have a few missions I could take on and an adventure was waiting for me. For those, I wrote them down to come back at a later point in time.

While I am insane enough that I would attempt to try and do this all in one night. That is just not possible. On occasion, forthcoming will be a few posts about the adventures I got up to on different missions over quite a few days.