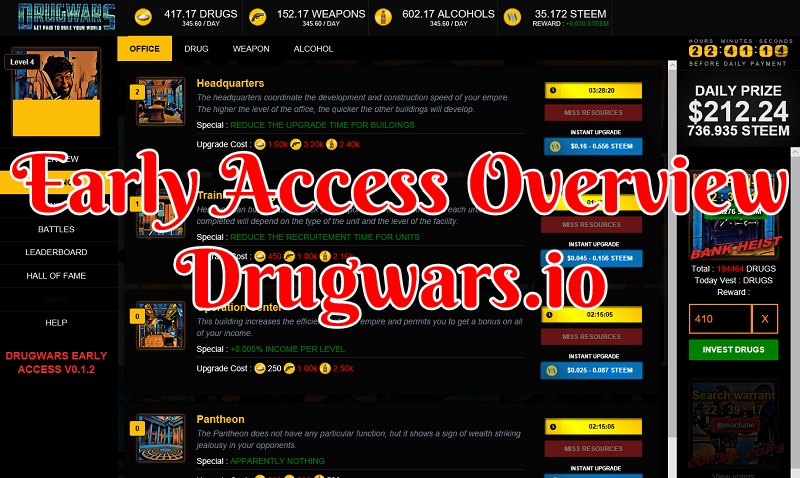 Is early access free to play game that draws inspiration from the former game of the same name—Drug Wars. It is currently playable in an internet browser from their website and uses the Steem blockchain. For anyone looking for some retro nostalgia feeling this may hook you!

The basics of the game are to build an empire of drugs and units through varies means with the ultimate goal of being the biggest producer. Players who produce and contribute drugs get a share of the prize pool that pays out in Steem.

There are three main resources in this game: drugs, weapons, and alcohols. That is used for upgrading buildings, hiring units and getting upgrades. The game starts you off with a base amount that you gain per day. 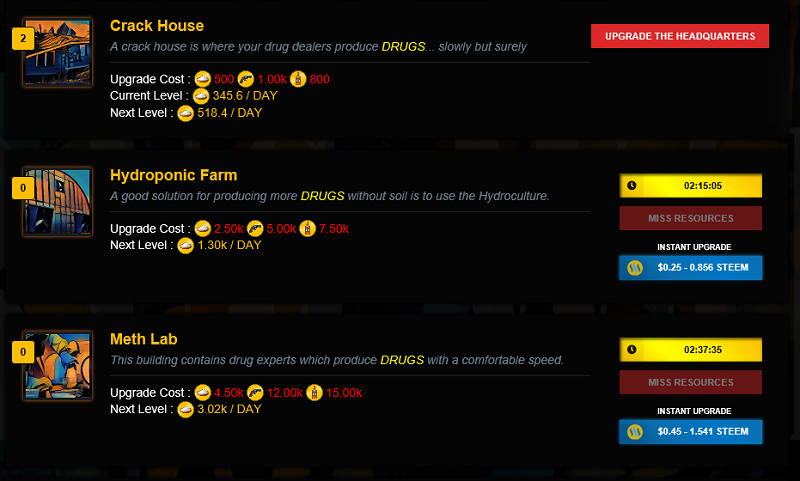 Drugs are the primary resource required for building and upgrading your office and manufacturing facilities. They are also used in the calculation of rewards that pay out in Steem daily.

You gain more through two methods of either increasing your production levels by building and upgrading or from attacking other players.

Living up to the games name you have buildings such as Crack House, Hydroponics Farm, and even a Meth Lab among others to upgrade. All buildings in this game take real time to upgrade or you can pay Steem to bypass the cost and timer to instant build and upgrade. 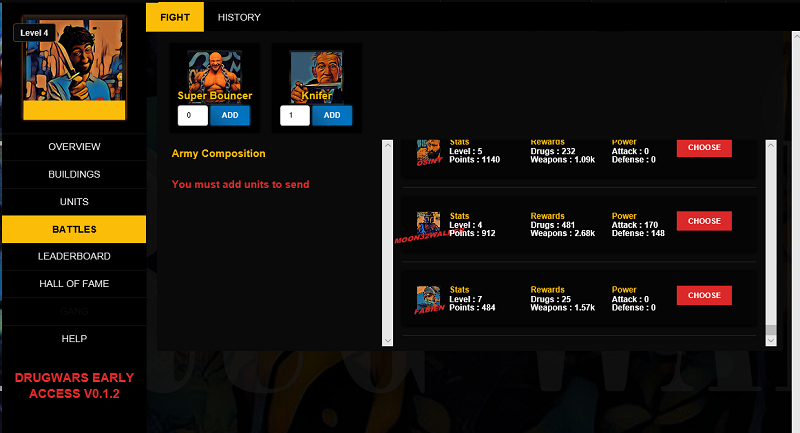 The other method of acquiring more drugs is by going out and attacking other players. This is done by going into the battles tab and selecting you're which units you wish to send out. After that, you scout for a target in the window looking for someone you can take out. You are able to see stats on other players from how much drugs they have to things like attack and defense

After you find your target you simply select choose and then attack. Afterword’s window pops up showing you when the battle started and when it will conclude.

A few seconds later you find out your results. I did not acquire many drugs in this raid. I, however, know this player tends to rank rather high in these kinds of games. As such today I have made quite a powerful enemy by attacking him.

Thankfully my buildings and upgrading on those are safe. I can, however, lose units from attacking or being attacked along with resources. Which at this time just appear to be drugs from the couple of attacks I’ve made. I spent a fair amount of resource on units and I’ve already lost a couple. As expected they were not a wise early game moves made on my part. I, however, wanted to go on a rampage of attacking. 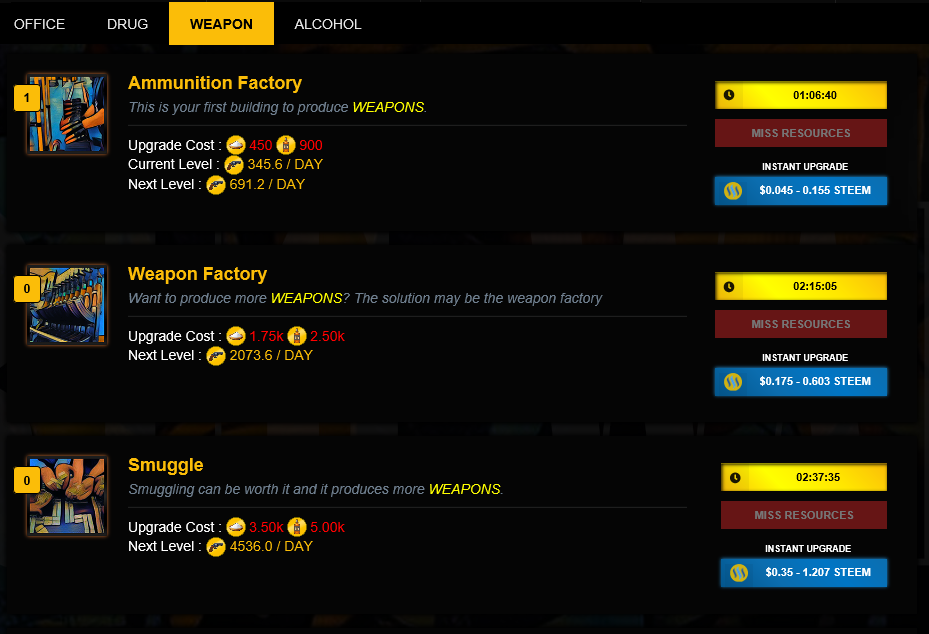 These have a big use in hiring unit upgrading, offices and facility production for drugs and alcohol. I suspect other uses as well but I’ve only been playing for a couple of hours and do not have many things unlocked.

While you could run an ammunition factory there are far more fun options to put resource into later in the game such as smuggling or the black market. Oh great just want every thinks of when you mention the world cryptocurrency. Well, when you are going be a drug lord within a video game you might as well go all out. 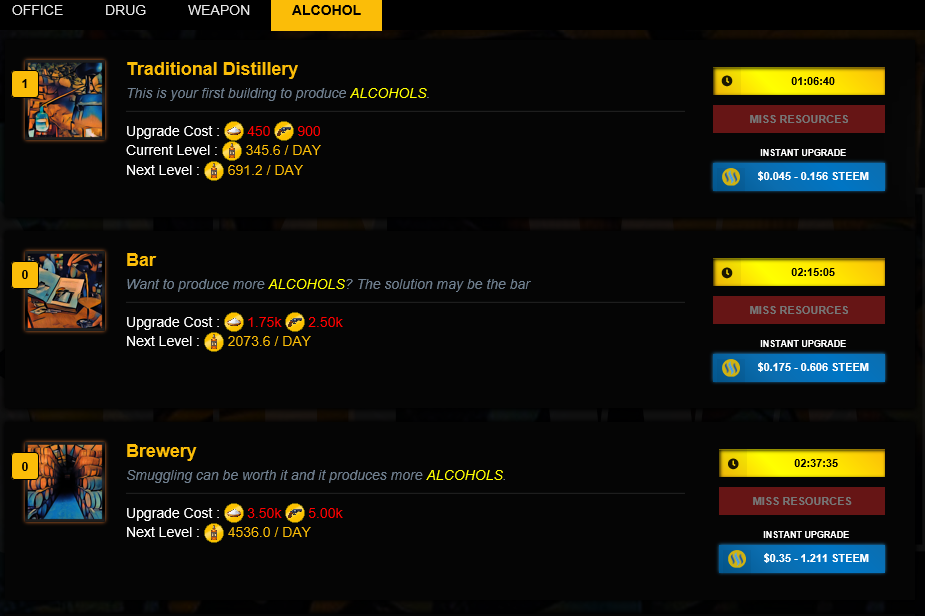 For any units under my command alcohol will be no doubt a requirement. It is also used in upgrading office, drug, and weapons facilities. I’m also really hoping its used in training which I don’t have unlocked yet.

While certainty such buildings like a distillery, a bar, or a brewery would not have been permitted during the prohibition among the other buildings. In today’s world, they fit right in and are the perfect fronts for carrying out your business!

Each manufacturing resource has a storage facility that you have to upgrade. The text lore also hints at them helping protect your stockpile from enemies. I can’t wait to see this play out later in the game. The idea of giving some protection so you don’t have to play a game 24/7 to enjoy it and creating some kind of protection for the players to have a life is something I’m hoping its alluring too. 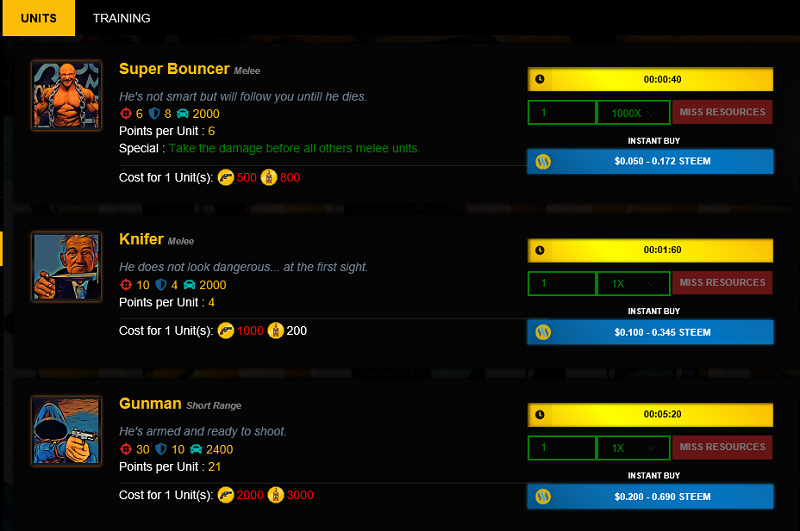 Units can carry out different roles from within your group and they can be further enhanced with training. Since this is an early access game there will be a bunch more coming in the future. In the short term, you have two melees and one ranged unit. They can also come with a specialization such as tanking damage giving you a tank unit. They appear to have stats for damage, defense, and carrying capacity.

Since you can attack you should hire units at some point. I out of foolishness went out and spent my resource on a few rights away to get into combat. They can be killed so keep that in mind if you are thinking about spending some Steem on them.

The good news is they do not take long to train for the first tier only a couple of mins at most. They do cost a lot of resources. So some better planning and being careful with them is something to take into consideration.

There are at least two direct ways to earn Steem from this game and that is from daily payouts of drug production and a bank heist.

Every day your empire is producing drugs from manufacturing and you simply get a cut according to the percentage amount compared to the total pool of players. 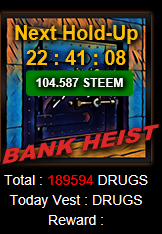 Another way of earning is by spending any extra drugs you have produced by putting them into a bank heist. This also pays out every 24 hours. Players are also not going be stealing those drugs so you might as well put them in for some extra rewards. The amount you get reward with is based on the percentage of your total contributed and how big that reward pool is.

There is also an affiliate program that states you get 5% of the gains from anyone who signs up using your link. Since this can be used to help further increase how far you progress it looks like it will remain useful for anyone getting sign-ups. This should lead to a higher amount you earn every day as well by taking advantage of it.

While I never played the game this is inspired from it looks like a fun game to log into every couple of days and work on your progression. Attack some players, try and get some revenge, and wait out any timers you have. I could see myself setting out an hour throughout the week playing.

For it being early access so far I’ve not seen any major issues. They have done a great job on its launch into early access. I look forward to seeing it get developed and pick up more players in the long run.

Screenshots and content are written by @enjar. Screenshots are from the game DrugWars.io.

Consider supporting me by using my affliate link to this game. I get 5% of the gains.