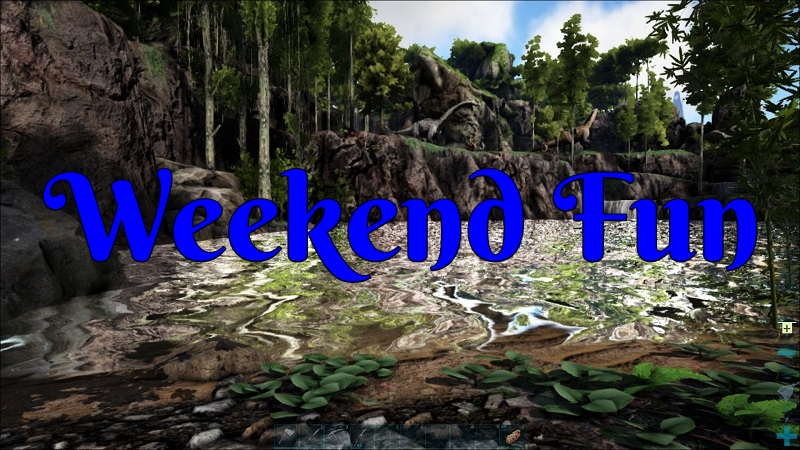 Gamers at least from my own experience always have that one game everyone will come back to for some good fun. Quite a few times you meet new friends in a game and you could play that for years. Then one day everyone gets tired of that game and you realize everyone’s own personal taste is just different. As such everyone goes to play other games. Once in a while, you bump into each other but more times than not everyone in that group of friends just wants to play different things.

For quite a number of years that was Eve Online. That is where I meet quite a few of my long-term gamer friends and every couple of times a year we would start playing that game again. It was normally focused around a new expansion. Sometimes it is for months and other times just a couple of weeks. That was at least till we got so tired of playing that game that even that was not good enough anymore.

As of late, I’ve been playing quite a fair amount of Path of Exile. Others prefer their FPS’s and other things. Over the last year we join for a little while to play games like the State of Decay, and even Sea of Thieves for at least a little while. These games, however, do not hold much-staying power.

Since Steam had their Summer Sale and it is over for a couple of days now. Some friends of friends picked up at least the base copy of Ark Survival Evolved at a discount. Suddenly the game we have been returning to since 2016 was called out again.

Like a beacon, a server was activated starting over the weekend to see all who would accept the call to come back. While I have no clue if it will just be for a month or longer it will be interesting to see who ends up showing up. Sometimes gamers turn into family men with kids and you just never see them again. Other times, you have just grown too far apart and it was nice knowing that person for a while in your life. Many times people can still make time for a good fun weekend of being silly.

Finding A Base Location 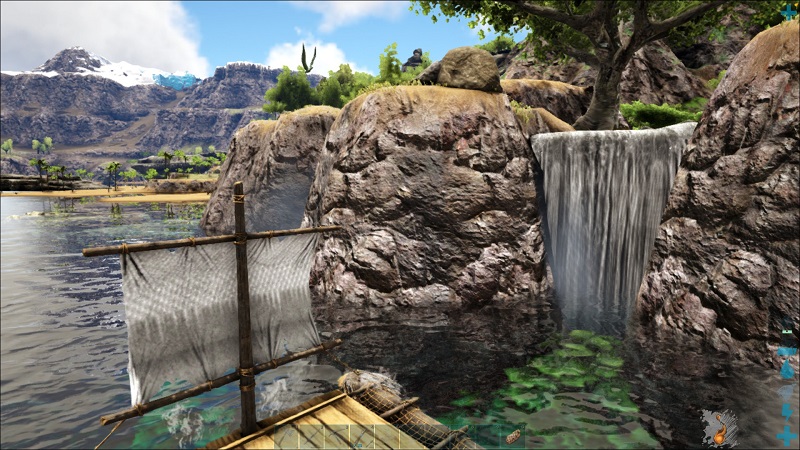 While we have been on Ragnarok Map before It has been a prolonged amount of time since the last time. I myself never really learned the map so most of it is still unknown to me. No idea if they even added in cave systems yet to explore or other things. There were some small changes noticed right off the bat some strange bones you could collect. I went into it not doing researching on what has changed as I wanted to be surprised and learn things myself. This method might be slower but it is far more rewarding.

A couple of starting locations were scouted out. Some of them already had dinosaurs in them that we would have no chance of fending off for ourselves. As we lack the gear and weapons and dinosaurs to do so at this time. Others seem rather void of easy access to resources.

This map for certain has some wonderful land sculpting and waterfalls. It is clear however this map was created some love and care seems to go into it for the most part. There are some bugs and glitches that still seem to be worked out. The spot we even settled in had a hole in the ground you get trapped in not even five steps from our hut! Nothing, like taking a break from the game and get a messaging like “save me” aka I fell in that blasted hole again and can’t get out. No one needs to fear any longer that pit! I covered it up with some stone foundations. At least now anyone who still gets trapped in it should have known better since the foundation sticks out like a sore thumb that something is wrong with that small area. At which point we can stop to point and laugh. 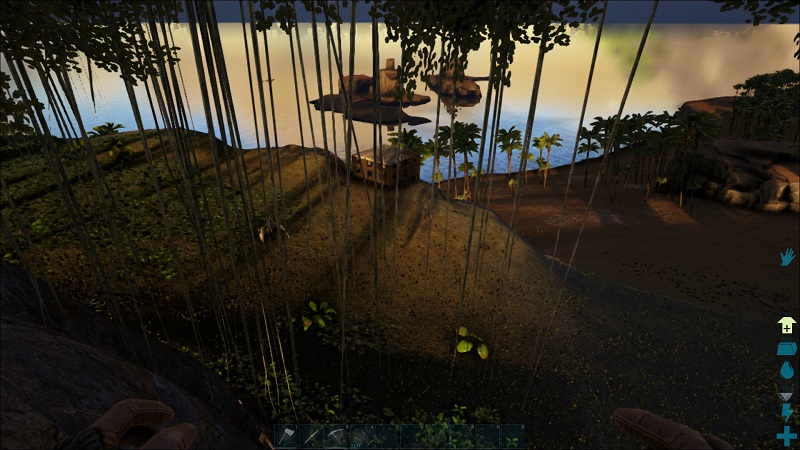 We started our first base rather small as not a lot of space is needed for the moment. The building was first started out of thatch. This screenshot was taken in the middle of upgrading it to wood. We had some metal tools at the time to help gather faster but no dinosaurs yet to help speed things along even faster. Quite a bit of farming would be needed before we started to tame to take a

We ended up settling on a small cliff shelf. There another cliff behind us but a nice passageway at each end. A decent amount of stone, rock, and plants to harvest nearby. Not too far away are some metal nodes to get us started. We have access to water from both the ocean and a lake that is not too far away either in case something nasty spawns down at each water source. Least we have many options here.

While this area is lacking the more advanced stuff like oil, silica, and some other stuff from what we can tell. We are hoping to find it by just exploring at some point. If not this is just our starting camp and I’m sure we will want to venture into harder areas on the map at some point. 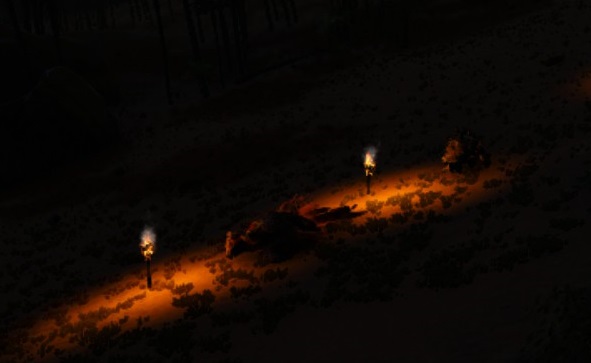 A big part of the ark is just taming dinosaurs so you can gather resources efficiently and be able to defend yourself even better. For those who have never played this game, it can take hours or even longer tame something. I think we have a two times taming rate and I’m hoping it gets bump up just a tad more. Part of the challenge is trying to protect yourself and whatever you are trying to tame from getting eaten from other dinosaurs or just running out of supplies and knocked out while you feed it to increase the progression bar till it is now yours! 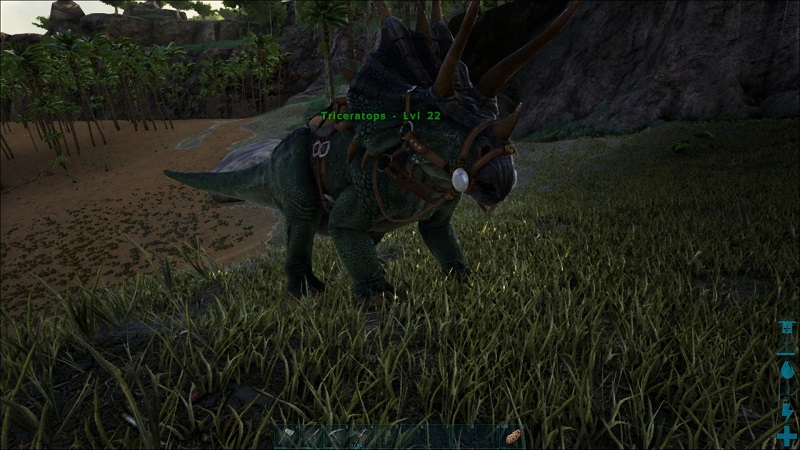 Our first tame was a Triceratops as they are not too hard to get. This one was a rather low one as well making it not resource intense to acquire and not waiting around too long either. They are decent for trying to defend with and most importantly to gather berries from bushes. Also, a decently little way to get a bunch of thatch. Sadly this one was killed while having to farm at night to get enough Narcoerries as we were running low on supplies for everything we were trying to tame all at once. I was not able to see well with how dark it was the impending doom. I at least escaped. 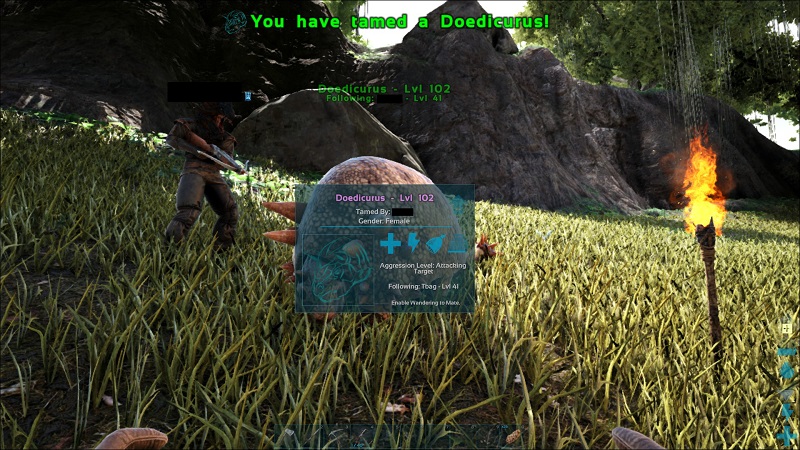 The Doedicurus itself is used for farming large amounts of stone. It can also roll around as a ball to move around. Stone placed in its inventory also has reduced weight making it very effective for transporting stone around. With it having a base level of 102 it is also our highest one tamed so far. It took quite some time to get it. Even had to defend it a couple of times from Rex, and some other things looking for dinner.

As you can tell from this screenshot some “editing” was required. I try and keep things somewhat clean here. I’m sure more will be needed as what I can say our ark time is filled with debauchery and ridiculousness. The person who made our tribe might have started it with the letter D. Many of the dinosaurs might be called rude things. I might even have to black out names of tribe members because well there is no such thing as trying to keep it clean here. What do you expect from a bunch of guys playing caveman with spears in a game like an ark? We might have even turned it into a game to try and outdo each other in the naming of things!!!! Things went downhill fast to reach the ground floor! It is all in a good fun and poking fun at each other as well in the process. 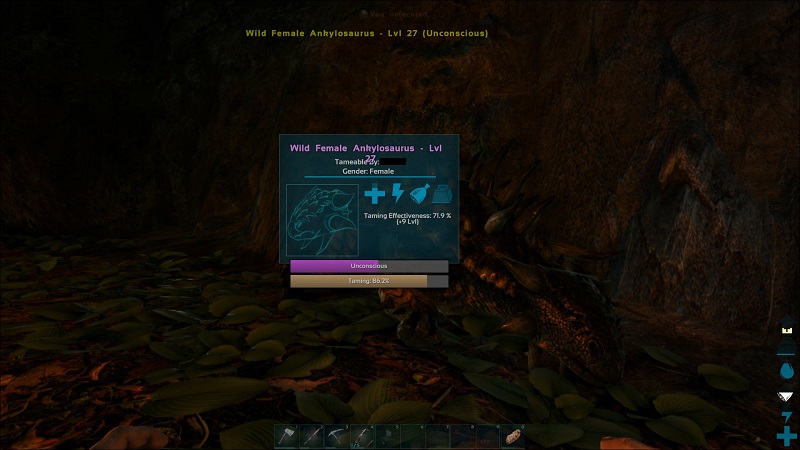 While we did not get anything great for hunting just yet. This Ankylosaurus is great at farming metal nodes and getting flint out of stone rocks. Not to mention his hairdo of spikes is just amazing looking! This one was also a low-level one. Over time we will focus on getting some higher level base dinosaur. For now, we can just level this guy up to get more stats in weight carrying and stamina. 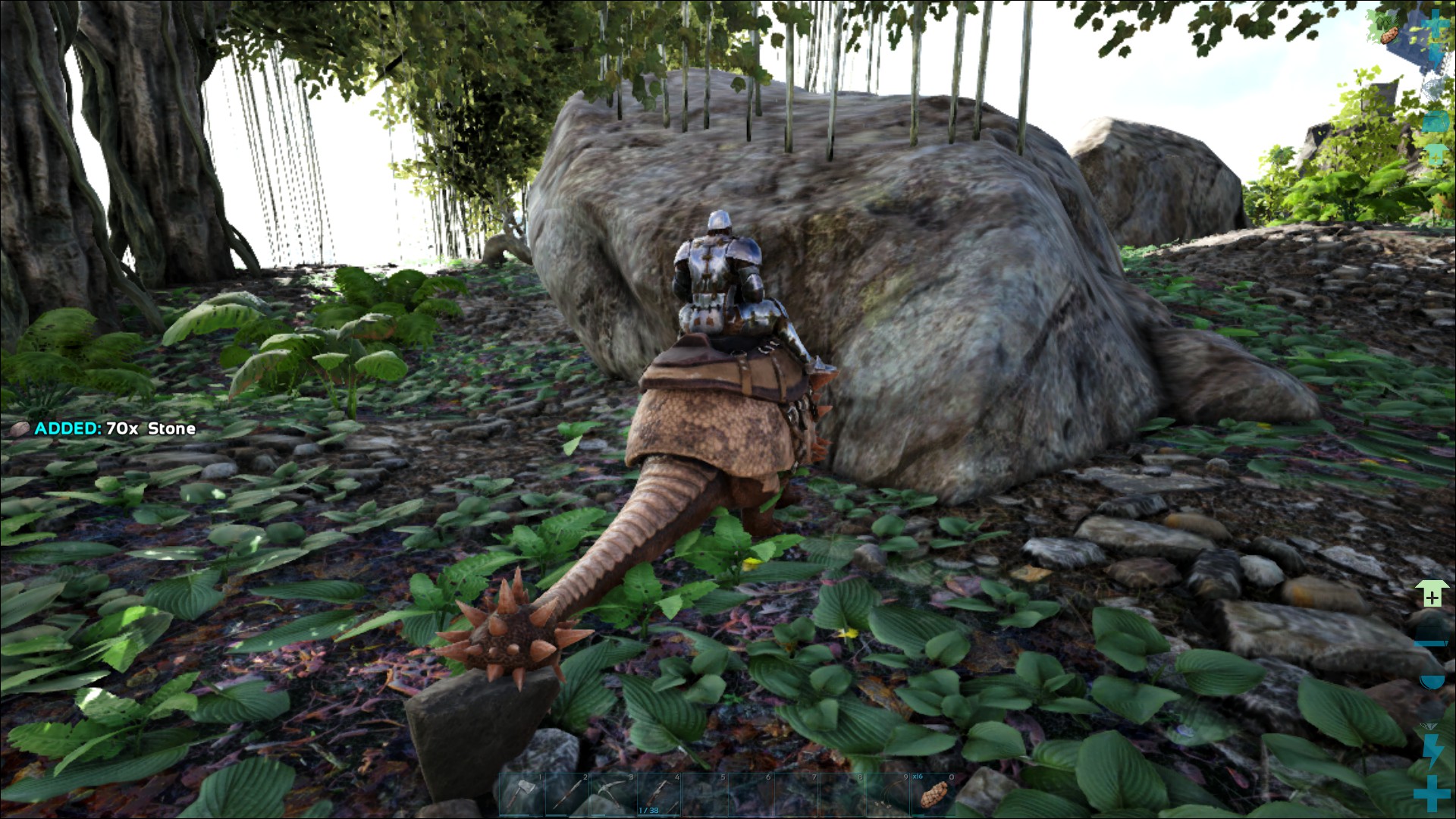 I leave you with me off gathering some stone to upgrade our hut and to put up some gates to better protect ourselves. Our first few nights we had a Rex come in and take out half our hut! We all died but at least we were able to rebuild in no time. We also had some other issues. So the faster I can get up some gates to block the ways into our area the better!

Screenshots were taken and content written by @enjar. Screenshots are from a game called Ark Survival Evolved. If you are thinking about getting this game and are looking to support me further consider using my Epic Games creator code: enjargames at checkout or using this referral link to be sent to the store's pages.