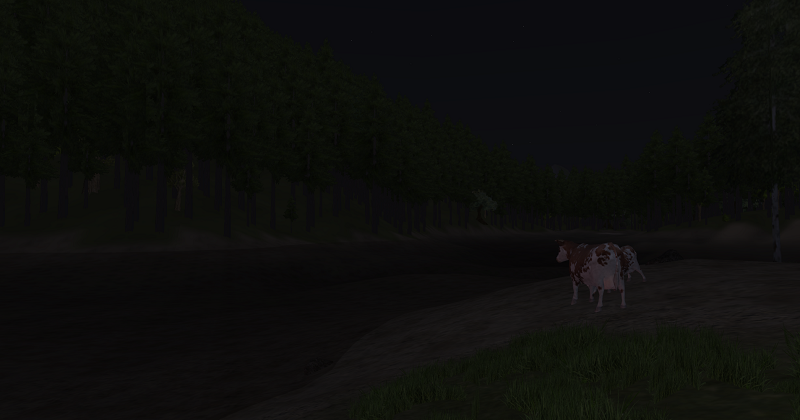 Over the weekend I started up a fresh single player game and enjoyed the cave-dwelling lifestyle that I do enjoy in video games of mining and doing some crafting as well.

This is one of those games where things take time even when you crank up the XP settings but I still enjoy it due to how just how many different things there are in the game. Since it is more or less Wurm Online just repacked by the same developers Code Club AB to the included single player or game with friends. It has a wide range of depth that only comes with older games.

It is always tempting to try and find some mods but so far I’ve not sought any out. In fact, other than getting lost a few times I’ve not left my cave! I think that more or less just makes me a caveman at this point. 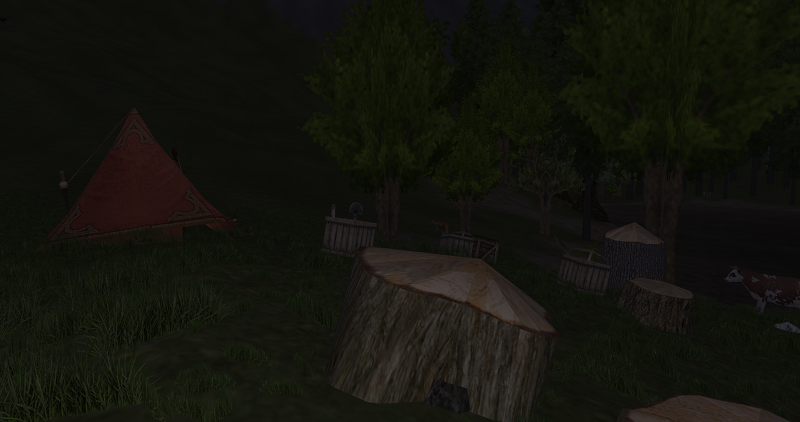 While it is always tempting in this kind of survival build kind of games to start off and want to build a shelter. I, on the other hand, felt my starting location was of poor quality. Originally I just wanted to mine some iron ores and build a boat for relocating. So I just placed down the starting tent and made a real mess of the area! Sure I could have spent the time removing those tree stumps but hey I was in a rush to get iron and upgrade my armor and tools. 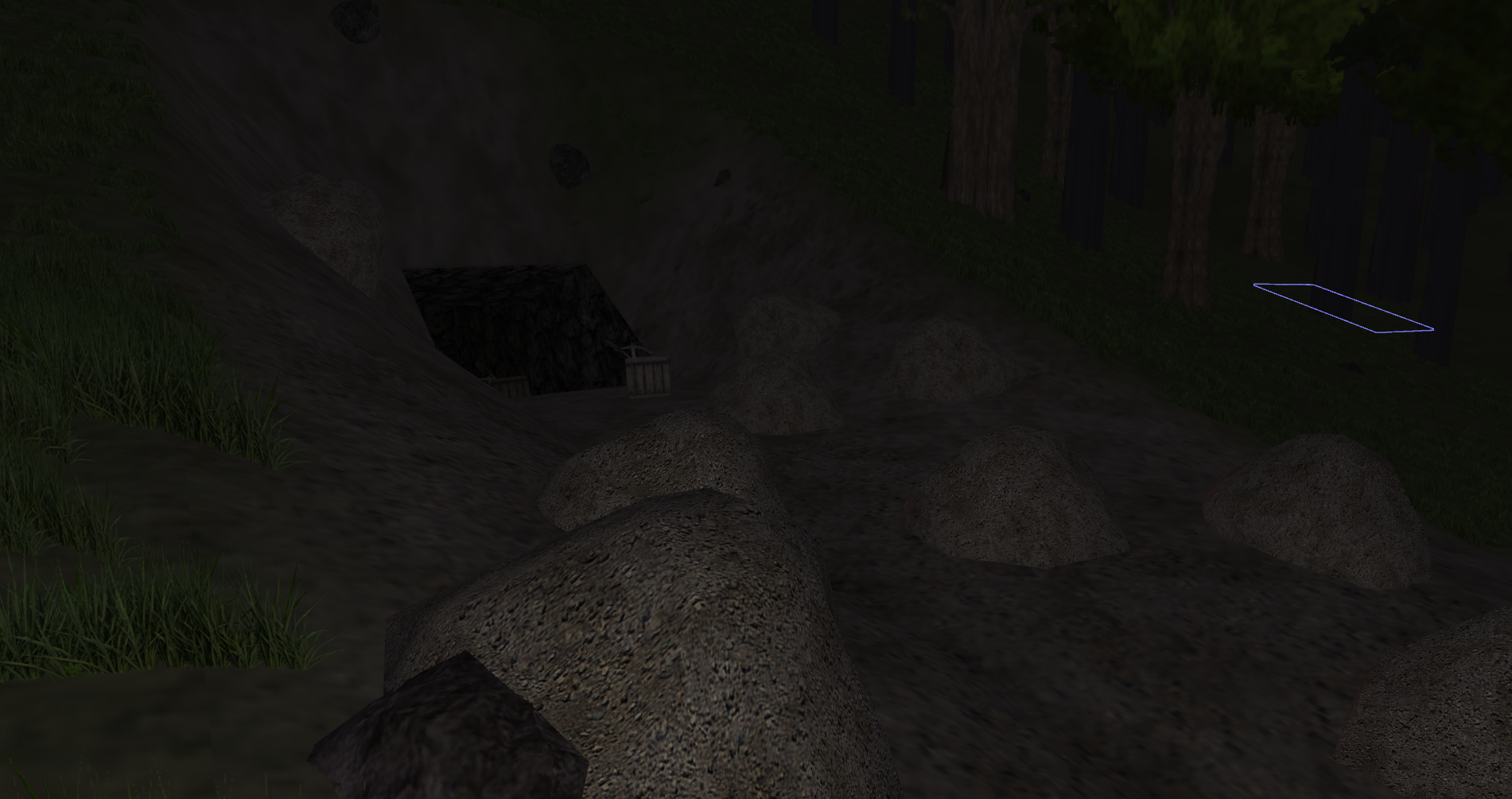 So like a dwarf meant to live underground wanting to evade the sunlight I started to dig till I was able to hit a rock. I’ve never played on this Ocrea map I have no idea if this is normal or if I have an unusually steep landscape. As such this area just seems like really bad for trying build on. Leveling out the land for the size of the building I enjoy would take many days if not weeks. 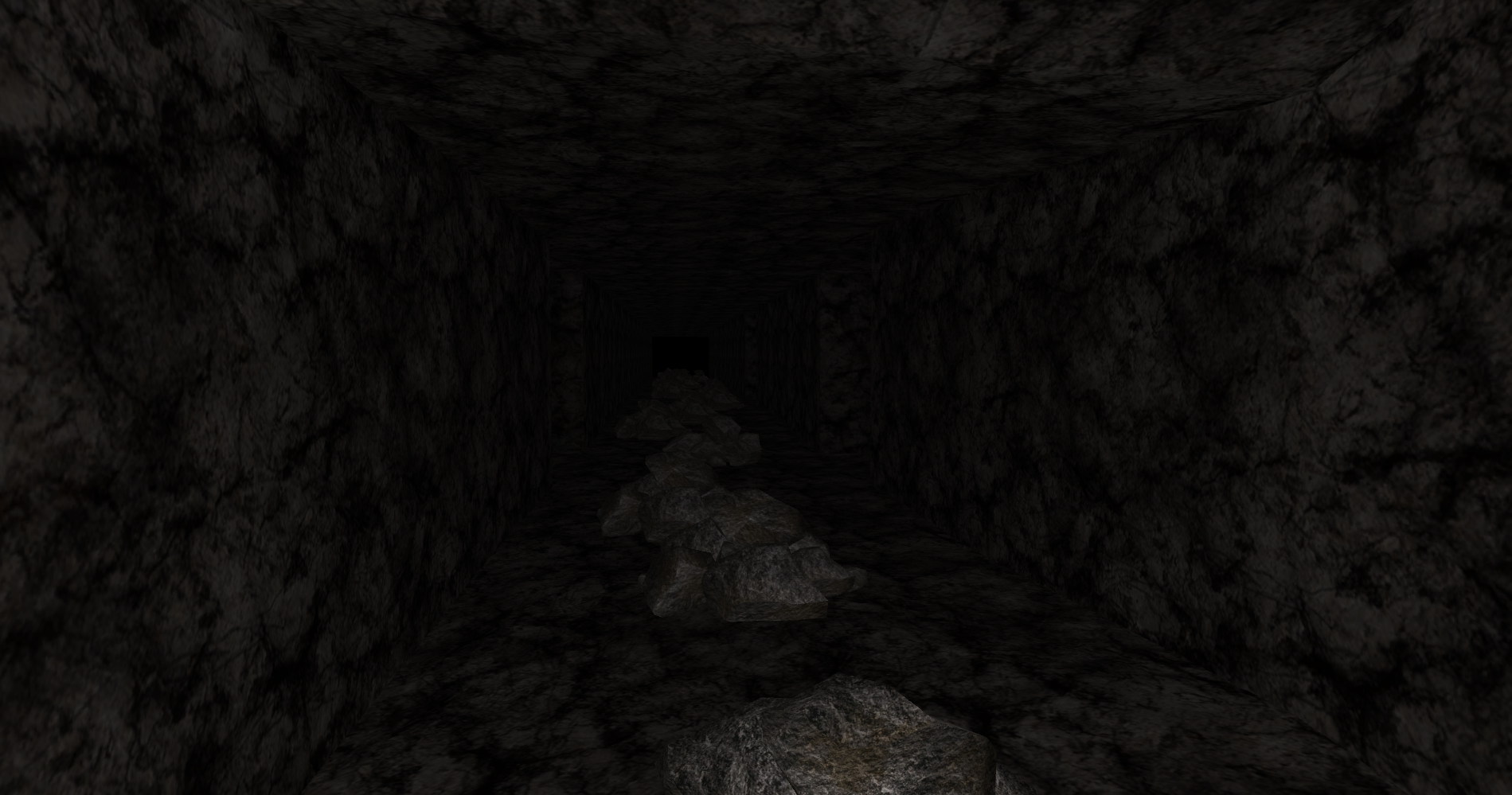 My main tunnel was filled with some zinc and copper. While I would be happy to find these ores I was just here for iron and anything else I have zero interest in. So I continued to mine out this main tunnel deeper and deeper for many hours over the weekend in search of finding it. 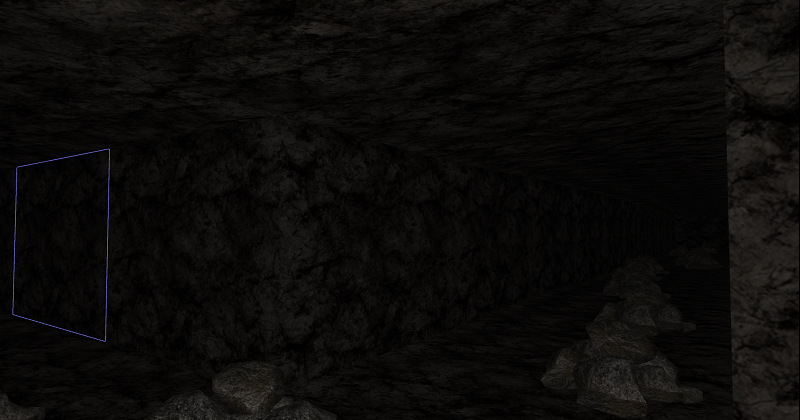 Along the way, I also made a number of branches off the main tunnel. I felt I was in a very heavily seeded area for zinc, copper, and marble. Yet still no iron. 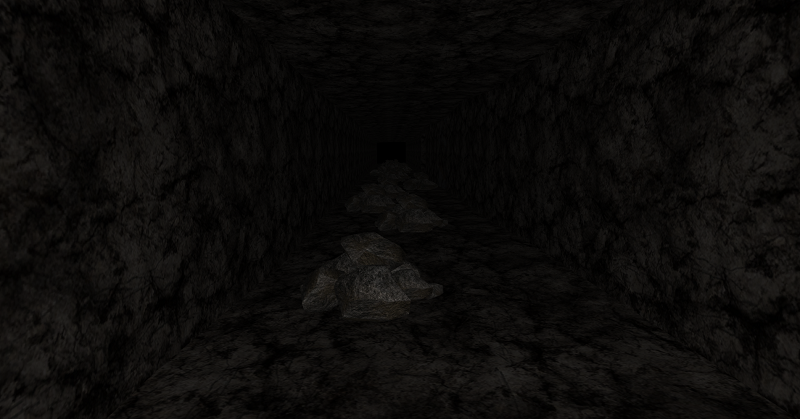 Deeper and deeper I went. Like a dwarf on a mission with my start pickaxe which I really wanted to upgrade by now. While having all these piles of rock shards could be a nice thing if I wanted to build things out of stone bricks I just had no interested in investing in this area. I even raised my prospecting skill up to 70 should I analyze rock faces in trying to detect the ore out further. 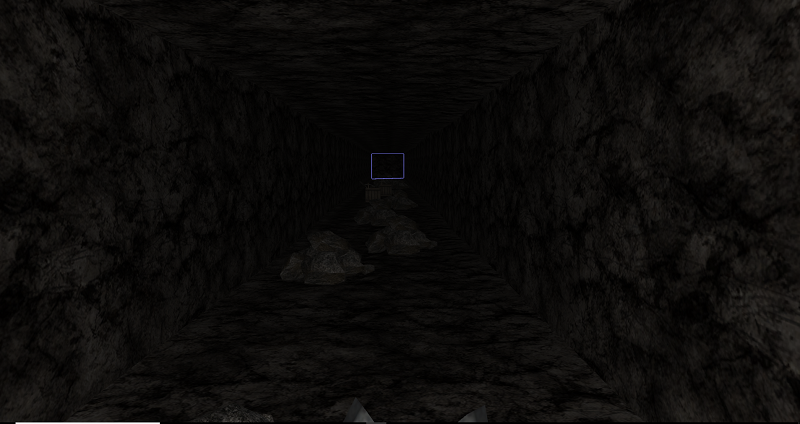 After my first day of mining, I decided to make a main breach off the main tunnel and take those down far ways deep into the heart of this mountain. I had no idea at this point if I was close to tunneling my way out of the mountain or if I just kept enough that I would not have to worry about that. While this would not have been a bad thing it was a moot point if I had a complete tunnel or not created. 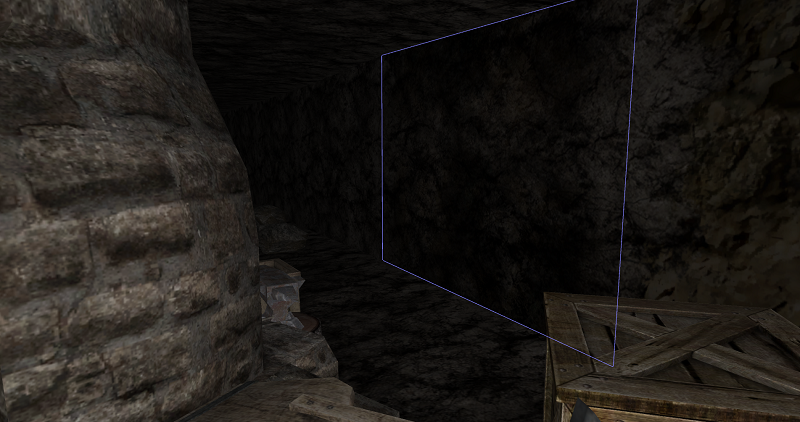 Eventually, I found my first iron vein. It has been a while since it took this long just to get a single hit of iron. The gods in this world seem rather cruel as they gave me wanted I wanted with the expectation that this iron ore was of poor quality only maxing out at 56 quality. While not the end of the world this would not due at least there were over 10,000 units of it. 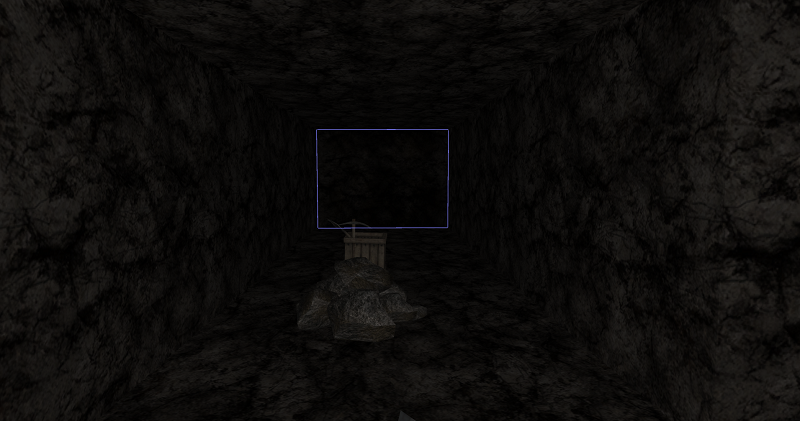 As a result, my search went on to find some higher quality iron ore. I did not need a large amount of it just something to improve my crafted items past quality 56. I then lucked out finding this it has at least 5,000 iron ore in this vein. The quality was at least over 80. My mining skills are a bit lacking to take full advantage of this luck bestowed upon me. 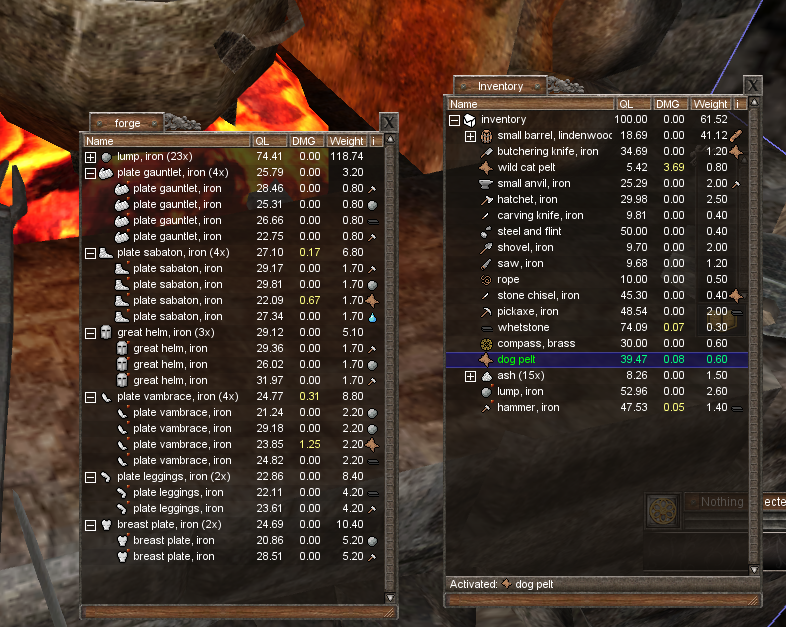 After a few hours of mining, I crafted myself some stating tools to get the job done for now. I then started to forge a couple of sets of plate iron. Where ever my journeys take me this stuff will come in handy. From improving with better iron lumps, water, the hammer, and using a dog pelt that I got while out hunting I improved the gear to quality 70.

I spent a fair amount of my Sunday exploring in a large cart the local area. I even for a few hours became lost in the hilly landscape and had to abandan the large cart up on a massive hill. As I just wanted to slide down it and be done with it. The cart, however, was not able to descend due to it being too steep.

It was just very clear to me this area called Central Lakes is not for me. Too many hills, not enough wildlife, and I prefer to be more on the ocean for shipbuilding. My next step will have to be rebuilding the large cart, packing up all the rock shards I’ve minded, and built a boat of some kind to take me off this island. 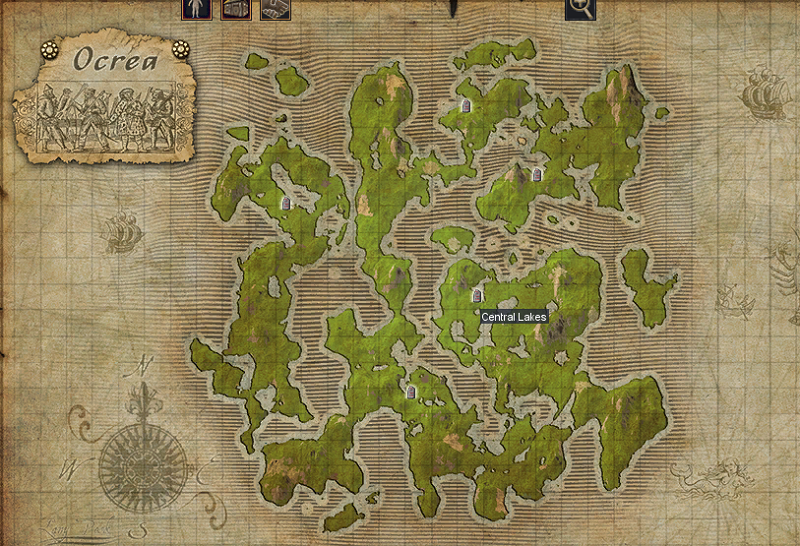 I can only hope this world called Ocrea has an area I can call home. If not I might have to start over again in another one. Perhaps by then looking for a custom modded map someone made. I do love having a huge area to build and this one seems kind of lacking so far in usable areas. Not to mention the map is feeling a tad small. I am however playing along so that is not a bad thing either.

Screenshots taken and content written by @enjar. This game is called Wurm Unlimited a version of Wurm Online.