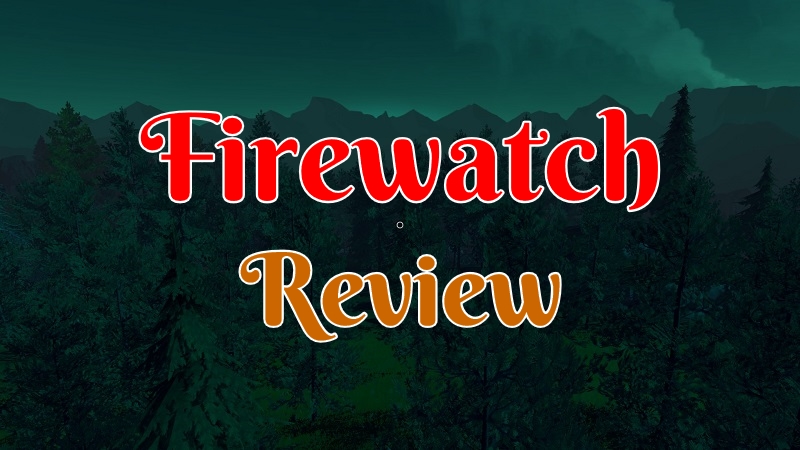 Firewatch is an adventure game with a heavy focus on it being story-driven as you spend the summer being a fire lookout and much more.

This is one of those games at least for me pulled at the heartstrings with some of the stuff that was going on. I think the game did a very good job at quickly getting you into the life of the main character Henry. Along with making you feel a sense of wanting to find answers while also feeling a number of things while being a fire lookout itself.

This game is very much a theme park where you get on a rollercoaster and just enjoy the ride. While I did do some extra exploring, scouting for clues and so forth outside of whatever that day’s mission was. They did a really good job at trying control the player with environmental l limitations placed in the game to other stuff as well.

The game does have a separate exploration mode if that is more your thing. Where you can just go out and enjoy the wonderful landscape this game has to offer. I rather enjoyed the art style as it allowed my mind to wander a bit of the backdrop of the mountains to going through forests.

The main part of the game is the storyline of which I’m going to try and be rather vague as possible. As that really is where the magic for this game is. Not really about any of the games mechanics or other stuff that I normally talk about for a game.

This is one of those games that makes you want to relate and feels like you are part of the character main character. While some games out there try and do this with building out one-time stage areas and having you live a very mundane life for half an hour or so. This one approached it a bit different and moved at a decent rate.

This game slowly easier you into playing Henry. You get told a little bit about him and then you are greeted with a series of screens where you are simply selection options and seeing the storyline progress. It’s nothing glamorous or over the top. It a simple but elegant method of building up rapport and feeling like you had some say in the characters life by the choices you made along a very narrow path.

After a small amount of time passes of your answering questions you start to get flashes to your character doing just daily stuff within the park where you will spend the rest of the game. This game does a really great job as using and reusing assets. I felt like I had a familiarity with parts of the map once it was time to dive into the thick of it. 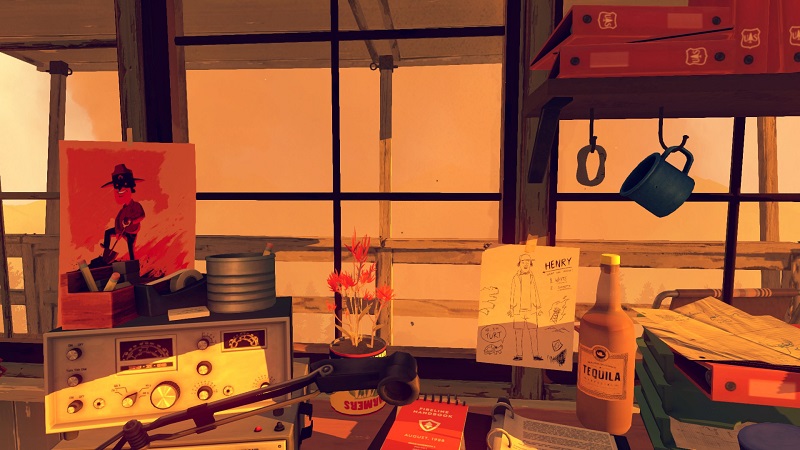 If you are someone who needs full closure by the time a game ends you are not going get it. You might feel a bit like you were left knowing just enough to want to know more. I don’t want to spoil it any more than that but I kind of wish it had a stronger this is how everything ended between all the characters involved. Granted a piece of me also just gets to create the exact ending I wanted. At least for me, the ending would have been quite sad so it might be best it was left in the way they did.

From a story standpoint, it was quite a unique way to bring you in and then take you out of the game. While also giving the player some time to decompress and think somewhat of what occurred during the game. 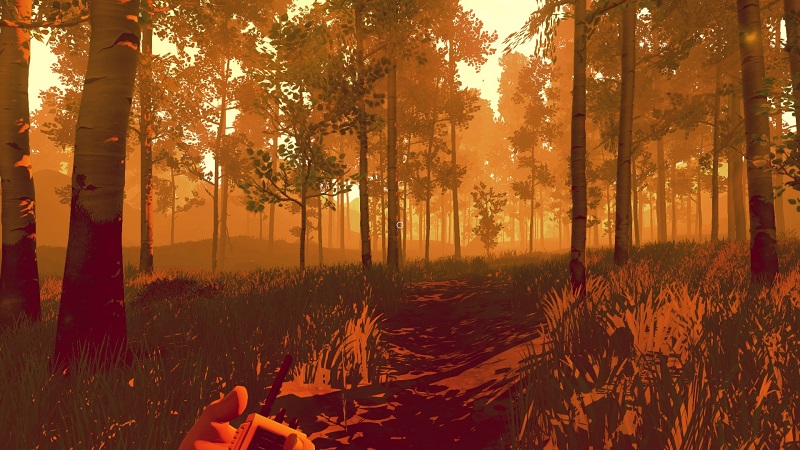 This game almost felt like a play in a sense of the wide range of emotions it’s sending the player though. Since you are playing the role of a fire lookout the game does try and make it feel quite lonely and sad at the time. It also does try and provide you some community break but it can get quite sad and dark towards the end.

One of the things the game does set the player up to understanding is many people who are looking to be fire lookouts do so for the isolation. While there is some limited interaction with living things it’s quite far in between leaving you longing for what little human interaction you get.

The biggest factor at least for me to the loneliness is you are always communicating and getting orders from your supervisor over a radio. While there are other lookouts you are mostly only seeing traces of them thought things like the supply boxes placed thought out the game. You also only have limited options as it’s very story-driven so you can only go along for the ride during those moments if you choose to.

There are also funny bits from jokes and some playfulness over the radio to your supervisor. While the conversations can sometimes get rather dark it did feel like the game was giving the player a break from time to time with personal stories of a former good time along with banter.

The game itself is also quite a sad game. From the reason, you choose to spend the summer of being a fire lookout to some really dark stuff that you discover later on. It’s hard to get into the details without spoiling it so I won’t.

The game also uses days to break up and even change the mood. Sometimes it feels like you get to go along for Henry’s entire day. Other times a week could have passed. You might even enjoy a tiny glimpse of something going on and then it flashes to the next day. This to me felt like quite a clever way of letting time pass without making the game drag on for too long.

Mysteries And Letting The Mind Wonder 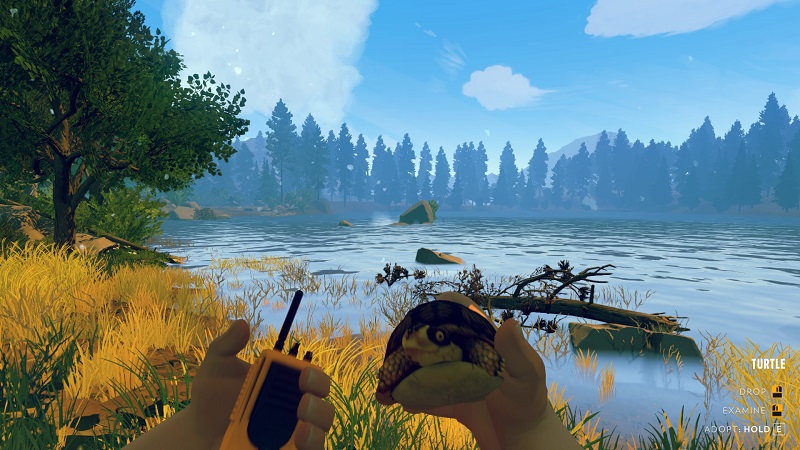 There were a few different kinds of clues I would discover on my own adventure of playing this game. Sometimes they were quite small and I might even have glossed right over them. Others felt you wondering if they were red herrings or if you were onto something. Then there was just the stuff I’m not quite sure what to think about them.

Part of the fun for me in this game was looking into the clues that were given to the player. Coming up with some theories about what is really going on. Finally finding out the truth and seeing if the game was just messing with me or if I was onto something. 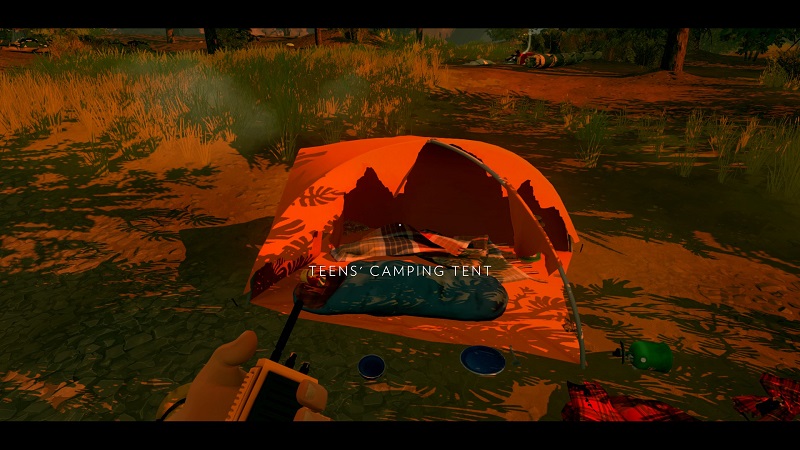 I feel part of the fun for the developer as well as leading the player down a certain path. Than really letting they have it if they caught on to some of the clues your mind might have tried to put together. Quite a mind twists to play on the player themselves. You might notice it or it could be something you just gloss over and don’t really understand why it was brought up. The exact details of what I’m even talking about I’m going leave a mystery as that is part of the fun in this game. Hopefully, you have or had a couple of “OMG” moments. 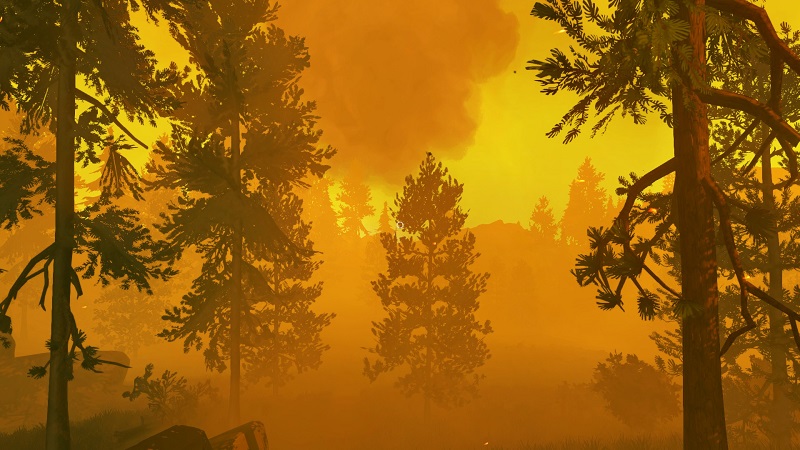 The game was rather short I had around 5 hours of playtime. This did include some afk time as I was dealing with stuff in life. There was also some getting lost or choosing to explore areas more than I needed to. So you might get more or less playtime out of this than I did.

While it was quite short I’m glad the game did not try and insert a bunch of fluff to expand it out to 30 hours or some other meaningless number. There was a certain story they wanted to tell and once it was over that was that.

This is something you might be able to play in a single sitting or over the weekend. Because it can get a bit dark and even sad it does feel like a good game to play during the weekend. So you have a little time after if needed to take it in fully. I certainly took a moment towards the end. 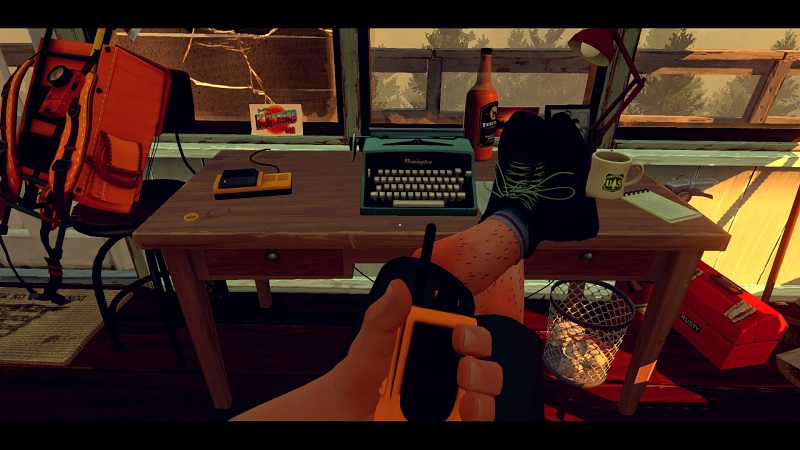 This review I kept rather vague as the main feature to this one is really the story. This makes it quite different than what I normally review as far as games go. Which was an interesting problem in me trying to solve how to go about it.

If you are a budget gamer spending $20 at full price for a couple of hours of gameplay might be a bit of a stretch for you. This game was Shockley short. Part of me wished this was like chapter 1 but this is all. The company itself Campo Santo is coming out with a different game than this. So it is what it is.

I enjoyed it as it was really something different. I’ve also been up in a fire tower before when I was younger so it was interesting being in one in a video game. Thankfully the fire tower in the game did not sway a little bit in the wind and had a lot fewer steps to walk up!

Screenshots were taken and content was written by @Enjar about the game Firewatch.