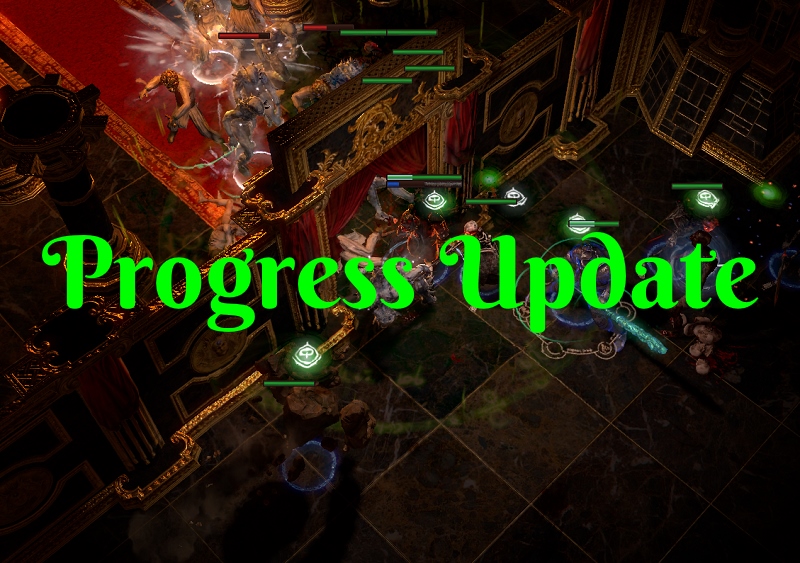 Been a few days since my last update on my overall progress in Path of Exile. Like many games the closer you get to the end of things the longer it just takes. Some things I find myself focusing on more as of late in terms of goals. While other things I’ve put aside for now on the shelf. I’ve yet to get bored of this game things just take longer to grind out to progress further.

As of late I have been showcasing and giving my thoughts on some of the lower maps that I have been enjoying running just to work on building up my map pool and get some easy incursion finished fast. Posts like Tier V Maps and Tier IV Maps focus more on the love of finding those maps you just love to run for their layout more than what they can drop.

Sure I could give deeper sight into what to run for max profits but that only a couple of maps. There also just some of my own tricks to earning a little extra that I don’t feel like sharing at this time. Granted they are not that great but still, they are own my or I’m sure someone will share it on YouTube or other places at some point causing prices to crash.

These maps are quick to run and cost very little to acquire from other players and at this point. They carry very little risk in getting killed and losing more experience or even a loss. I rather like them for that reason alone. 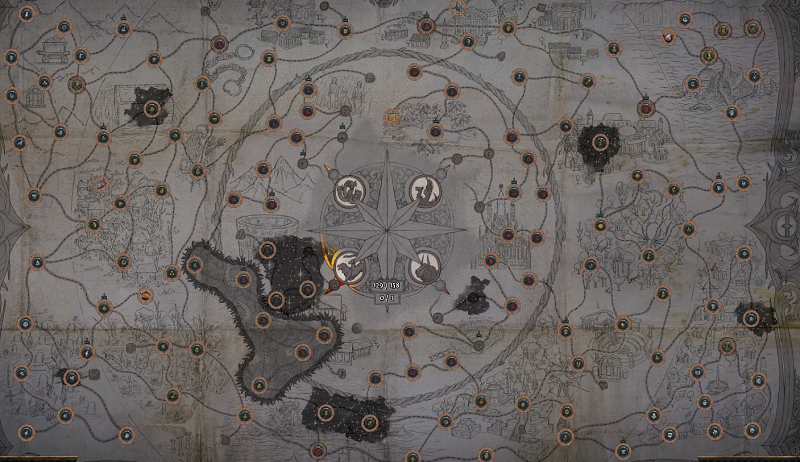 As you can tell from the Atlas map I’m getting rather close. I’ve been a level 69 Necromancer for forever and a day now. Death comes at an ever-increasing XP loss per higher level. I’ve noticed when trading with many players this seems to be where many plateau at as well. 69 also ties as the highest characters I have ever gotten in a league. 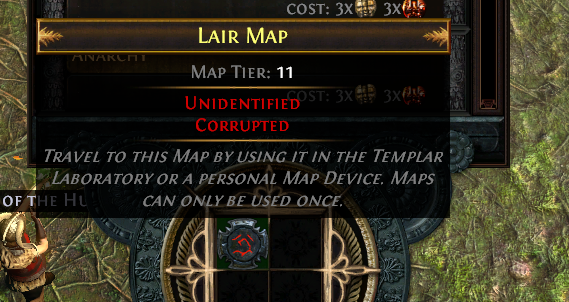 With every higher tier of maps the cost to acquire them from other players also balloons. I’m now paying well over 7 Chaos Orbs per map and me then the need to use an Alchemy and a Vaal Orb to corrupt it to get the Atlas bonus. While you can use an Orb of Scouring to reroll an alchemy map to try again and get different mods. Once you corrupt it that’s it. You are stuck with whatever it has and sometimes it shows up as unidentified so you have no clue what you are even getting into. Quite interesting even when you are in the map it still won’t tell you. 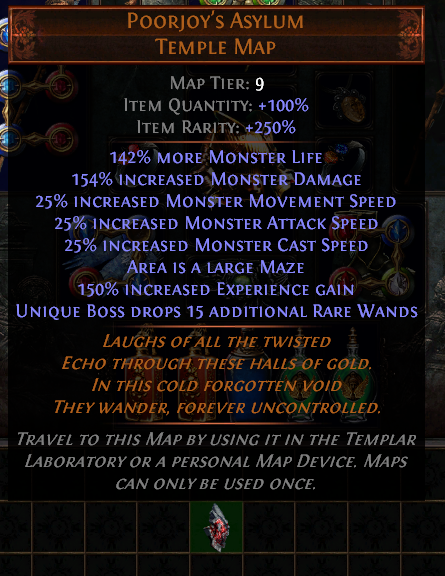 )
While I’m not 100% sure if I want to try and get bonus objects on every single map or just all the non-unique ones. There are a couple of unique ones that cost over a couple of Exalted Orbs (100+ Chaos Orb per Exalted.) The most expensive one I’ve looted and run cost around 35 Chaos Orbs and I only got back around 5 Chaos Orbs worth of loot. These are high risk and not big rewards most of the time.

As a result of some very hard maps and me hoping this build can even get to XVI. That I’m not quite sure yet as my minions keep dropping like flies and they’re very little more I can do to try and help them out.

I’ve even lost my Guardian now three times. To save him you either have to portal out in time or remove the skill from your gear before he gets killed. He is a very interesting minion as you can give him gear but when he dies he also loses it unless you want to sacrifice one of his slots for a rare item instead of a better unique to add “drop on death” crafted mod. Thankfully the first couple of times I had the gear already to replace. Other times I’ve had to spend up to half an hour waiting around to find people that want to trade me the items I have him wear. Other times I’ve just left him unsummoned as I did not risk him and lost out on the group buffs he gives me and my minions of increased speed, more damage, and some other stuff as well.

I’ve completed all white, and yellow maps with just a few more reds to go. Tiers 1 to XIII and their bonus objectives have been completed. I even have two XIV maps Plaza and Colosseum completed. This leaves me with 15 maps to go. I’m hoping to get them by just running my other red maps otherwise it's going cost a quite a lot of chaos to buy them.

Bonus Objectives on the Atlas are very key in trying progress forward and earn some currency as well from map drops. With how many I’ve completed I’m now at 129 out of 158. That means I have 100% chance for maps to drop 1 tier higher. There is also a 29% chance for maps to drop 2 tiers higher. That is a rather big deal and could allow me to be running lower level red maps while getting at a slight chance ones that I need. 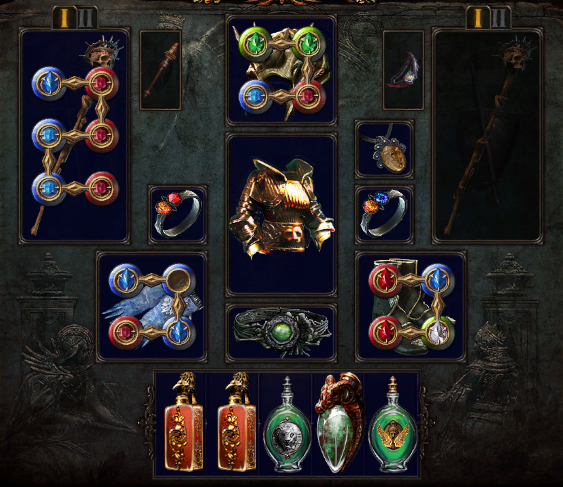 It is rather rare in my state of the game to just luck out and get gear that is an upgrade you wanted. As a result, I’m having to farm and trade with others to get what I want. I have lucked out since my last update in looting 2 Exalted Orbs! They were my first drop for the league and help quite a bit in getting some upgrades.

I purchased a 6-link Femurs of the Saints for 5 Exalted last week. This has allowed me to run my Vaal Summon skeleton with melee splash, multistrike, minion damage, minion speed, and Maim support. While they are all now “max” level 20 skill gems I’ve yet been able to corrupt one to level 21 since that has a high cost of failure and just cost too much to buy off the market from others.

I’ve also upgraded my belt to one that has an abyss socket in it. This has so I could get an abyss gem with life, a 5% chance to blind and some minion damage on it. While also not losing any life or resistance my old Leather Belt was giving me. Having blind monsters who have a reduced chance to hit me is great.

There are only a couple of upgrades I want to focus on. I really need to pick up an abyss gem with life, minion damage and taunt on it. Anything I’ve looked into cost over 1 Exalt and I just have not been wanting to pay that much. Otherwise just gear with more life on it which cost a lot to get resistance I need as well. Right now I have over 6,500 life and I would like to bump that up to over 7k. That might be done if I stop to level on lower maps and just grind things out which might get a bit boring over time since XP will be slow but less deathless as a result. 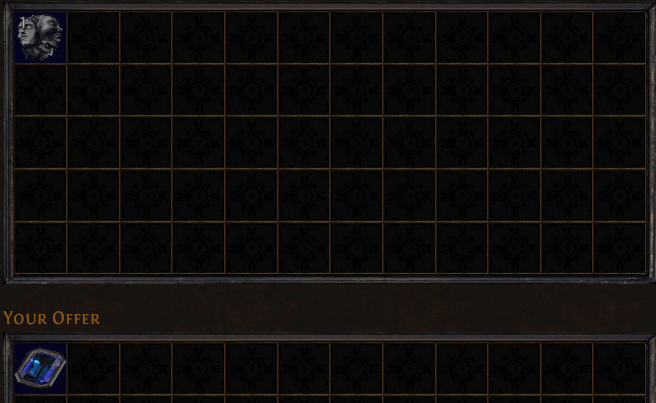 The markets have been interesting. For a while now Exalted Orbs where at sky-high prices of over 150 Chaos Orbs. Then out of the blue, they drop to below 100 for a little while. Not even Path of Exile is saved from a market crash! I did a fair amount of currency up trading to get into Exalted. I now have 5 Exalts and over 170 Chaos Orbs as well for buying up maps and other needed things.

My best trade to date in this league can be seen from the screenshot. I sold a jewel for 1 exalted Orb. I was hoping to get more for it but after half a week I was just happy to get that much for it. I was about to lower the price again when someone wanted to buy it. Thankfully they will never know I was about to reduce the price by another 20% just moments before.

Sacrifice shards have been another one I’ve been using to get Chisels which is what most want to trade for higher tier maps. I’ll save a bunch then try and sell them all at once for 2-4 each. Most times you will get people who just want to buy 1 or 2 at a time. After a while, you get a guy who comes in and buys out everything you have. Instead of doing 40 or more trades it gets done in 5 or less when that happens. I had one guy who bought up 20 different sacrifices for 40 Chisels. That then saved me from having to convert other currency into that to then buy more maps that I don’t have yet in hopes of getting more map drops.

While I’m still going strong this might be my last league I go this hard in trying to progress. It’s starting to be very time consuming as far as creating content for this game is concerned. Outside of doing some hardcore race at the start of leagues> I’m starting to see the end here. There will also just be a point where I’ve done it, I’ve blogged about it, not really much changed to share, and thus it will become very dry content to produce. While I could try and move this to video format for next league I’m just not very good at that kind of thing and just don’t have the time to learn and improve. It would be like scratching nails along a blackboard.

I’ve still got a few things I’m going to do as far as content. I really want show off mapping in this game it’s a big deal and really such a wonderful system. I’m not sure if I’ll keep showcasing each tier or break it up more. I think next sets had 12 maps per tier and that will get very time consuming to write about.

As far as goals I just want reach XVI and try running some. While there other “end game” type of things to do I’m feeling as far as a player I’m nearing the end. It’s been a very long journey league after league to keep going and trying.

While I was thinking of leveling up more classes this league that is also just too time-consuming and I’ll be honest I’ve done it so many times now that anything that is not mapped is just a drag and boring. That is also just what happens when you been playing a game off and on again since at least 2013 (my first achievement date is shown.) That is a very long time in terms of game to keep going back to the same one. Just shows how wonderful of a job Grinding Gears Gaming has done!

Have a wonderful week!