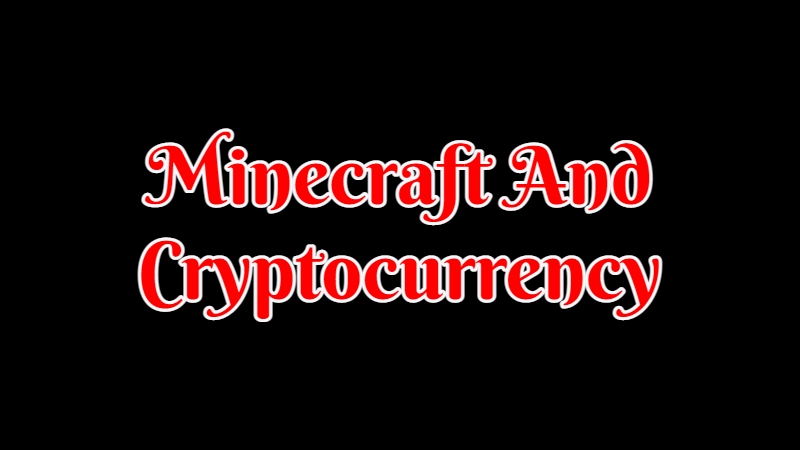 I am by no means shocked that Microsoft’s Minecraft is not that interested in NFTs and blockchain technologies regarding Minecraft. At least in the current state of affairs of things. I also would not be shocked if they released their own blockchain of sorts in the future or one day changes their mind.

Recently Microsoft’s Minecraft put out a statement giving an advanced warning that they plan on updating their terms and conditions. Where they don’t intend to support or allow things like NFTs in their game.

While a lot of people are dogpiling on Microsoft’s Minecraft for being “gatekeepers,” “anti-crypto,” and god forbid “boomers.” It became quite clear after reading through the announcement that Minecraft is not happy with the NFT crowd in general for taking the fun out of gaming and turning it into a giant greed feast. That is how many non-blockchain gamers view NFTs in general and since that is mostly the base of Minecraft players it’s not shocking they are going the direction they are.

That is right a lot of gamers outside of crypto generally view NFTs in gaming like they view Diablo Immortal. A cash grab of stupidity where people run around acting like they are better than everyone else because they can afford to drop $50k+ on in-game items.

The crypto gaming community, in general, is to be blamed for this. They created the very culture of FOMO and massive speculation fueled by scarcity. Where everyone gets wrecked 10 mins after launch and it’s a race of not being the last one to hold the inflated bag of air. They turned the fun of gaming into the endless quest to try and make 10 cents an hour from gaming by spending insane amounts of money.

Microsoft’s Minecraft in their statement brings up many concerns of gamers getting rugged pulled just not in those exact words. Minecraft and crypto do not have a greatest long history with each other. So I’m not shocked they have their massive concerns.

I recall back in the day pre $1,200 BTC days there were a few Minecraft BTC casinos servers. Some of those servers had rigged slot machines that you could “play.” They were all about trying to lure people in with free offers, getting them to deposit crypto in exchange for an in-game coin balance. That player would then go off to lose on slot machines or strange games set up.

I use to go around claiming all the free offers. Hitting up the BTC faucet and then cashing out and running. Many people back then thought they were “clever” by going around and only playing at the casinos that allowed you to withdraw the “free” offer. Well of course they were going to let you get $3 when they had hopes you would deposit $300+ and lose it all moments later.

Playing Minecraft also had other involvements with BTC long before NFTs. I forget the name of the Minecraft server I played on but they paid out weekly based on how many “unique” blocks you removed or placed on their server with BTC. I was making more BTC back then digging up blocks in the Minecraft Nether then my ASIC block erupts were getting for mining in a pool.

Everyone on that server was also a target for scammers. To be able to get paid weekly you had to sign up on the forums by starting your character’s name and wallet address. Naturally, people would go through the wallet addresses and target those that had BTC. Usually right after payout for the week

I also recall quite some funny posts on the blockchain forums about how Minecraft servers were “corrupting” the minds of children back in the day. Some people had lost their minds that teens were gambling online or were receiving payment for playing on a Minecraft server.

I notice Microsoft’s Minecraft in their announcement stayed away from talking about gambling or the mention of their target demographic age for the game. They instead choose to use words like “safe and inclusive experience.”

We have to remember that Microsoft’s Minecraft is not the same game many used to play back in the day. Back then when people like me had a YouTube channel that would sometimes make horrible videos about Minecraft. What glory days those were.

Instead, Microsoft’s Minecraft has put a lot of resources into turning its game into a learning tool for children. It is quite clear that is of huge importance for them moving forward. This makes a lot of sense why they don’t like how NFTs are viewed by normal people or the risk it brings to the large population of children that play their game.

I do however believe the article struggles with a little bit of their understanding of NFTs. They view any digital file as something that anyone can copy or delete whenever they want. That is missing the point of where blockchain and proving ownership come into play. However, that is not what the post's main focus is on anyways.

When you get down to it. Kids face wealth inequality in the real world all the time. Growing up you were either the kid with that latest trendy clothing, $100+ shoes, and the latest technology or the kid that had to wear hand-me-downs and garage sales clothing.

Before NFTs and P2W ran rampant in gaming. Gaming was a way for people from all walks of life around the world to be on an equal as footing you could get at the start. As long as they could play the game and had enough free time to keep up with everyone else. Gaming was also about having fun.

In a world where one kid could have parents who can afford to buy them a $5k NFT skin that unlocks special access to areas. That other kids have no other way of getting into those areas. I frankly don’t see Microsoft’s Minecraft getting behind that anytime soon.

There is also the whole thing of how “open” the cryptocurrency community is about public wallet addresses. If a kid had a $5k NFT and anyone could find that wallet and then associate that wallet with a kid playing a video game that they can contact. I don’t even want to know the kind of attention that would be sent to that child.

Perhaps a way of resolving this is if there are age-restricted 18+ servers out there. I have not played in forever so for all I know that could already be a thing. Granted I feel that is kind of odd to have since they make the game for young children and not adults.

I also feel like does it matter? Cryptocurrency tried to go mainstream on Minecraft and they were just not having it. Cryptocurrency never needed Minecraft’s blessing back in the day when we had Minecraft servers running casinos and other things. This is already breaking the terms of use for the game anyways yet they still go on.

Minecraft is also quite an old game by now that has been cloned 1000 times over. If anything, now would be the opportunity for any company that made a Minecraft clone to greet the cryptocurrency community with open arms.

I also wish Minecraft good luck in their attempt to stop the modding community fully. Maybe they take out the biggest targets but they will never get them all. I doubt there is a single rule that is not currently being broken 10k ways to Sunday in their terms. That is not going slow down anytime soon just because they announce some up-and-coming changes.

A lot of people like me have also moved far beyond Minecraft many years ago. I never even got my Minecraft account merged over when Microsoft bought it how many years ago? People should stop expecting the world to conform to cryptocurrency. Instead, they should just continue building and let the world come to them if it wants.