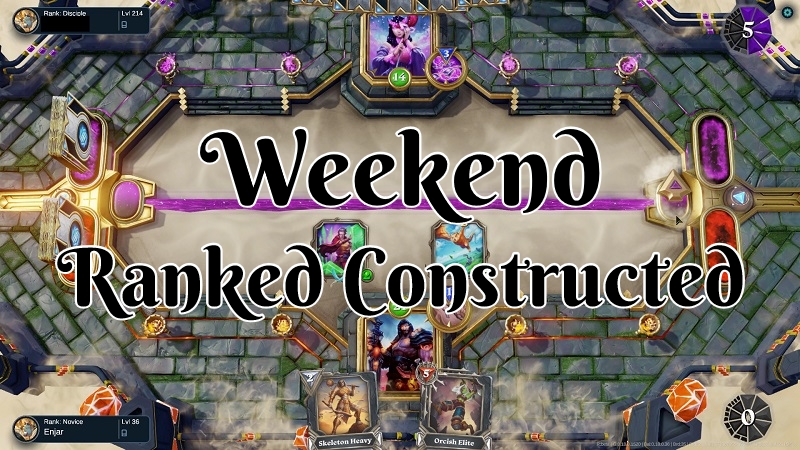 With Gods Unchained recent PR move many players like myself have returned to see what is new. Along with that, there has been a nice uptick in new players checking out the game. Over the weekend these players were greeted with a Constructed event that has been going on for a few weekends now.

Blizzard Made An Oopsie

Rather Blizzard doubled and tripled down on not being the good guys in my opinion. For those who are not in the gaming world, they banned and removed the prize earnings from a player called Blitzchung for expressing his political views during a live stream. Later on, they did reduce their punishment on that player.

While I’ve considered writing a lengthier post regarding this mess and their horrible PR move by releasing this statement . I had far too much fun over the weekend playing Gods Unchained and have moved on.

This in part was due to Gods Unchained brilliant move to not only offer to cover Blitzchung prize money but offer a ticket into a 500k tournament as well. It’s nice for once to see a gaming company make headlines for a good reason. No word if he took them up on their offer. 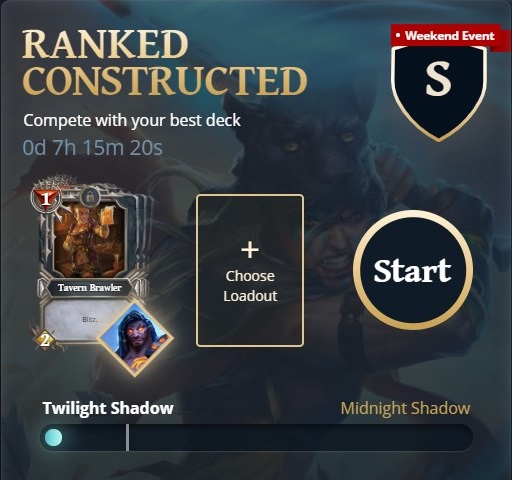 During this event, you battle it out with other players. You can win packs depending on your score that is based on the total amount of wins and the highest rank you archived during the event. Otherwise, it’s just like normal ranked.

What is really great about their ranking system is you can lose matches and that is ok. Each rank has a safety net indicated by a vertical bar. Once you cross it you are protected from losing rank until you lose that safety status and are unable to get past that mark again. For that to even happen you have to lose at least four matches and you were not able to win two to regain that protection.

On top of that, each loss is just a chance at taking a hit on your shield. I’ve lost a number of matches in a row and not gotten any penalty for it. While other times each loss I seemed unlucky on. I did end up in a middle ground of going back after ranking up a couple of times for the time I was willing to put into playing over the weekend. 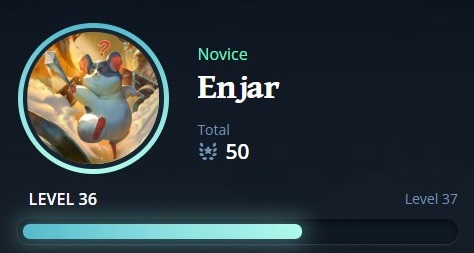 The most important thing here is setting a realistic goal for how many wins you think you can achieve. While the max amount of counted wins is 200. If players are being honest with themselves most are not going to come anywhere near that. I myself had a goal of 50 which I hit.

One thing I noticed where many players unsure how many wins they were up to for this event. While the game is still in early access and does need some work done in this department. An easy way to know is writing down before you start how many total wins you have. At some point, they added in this win counter that can be found on the main page right under your name where the 50 number is for me in the above screenshot.

If you somehow pulled off a win every 5 minutes it would take almost 17 hours of non-stop playing in the time frame to reach 200 wins. You would be such a god-level player I’m sure by then you would be sitting at max tier anyways so you would not even 150 wins at 12.5 hours.

While the matchmaking system was quite quick over the weekend is at most 15 seconds in the queue and most times getting matched almost instantly. I don’t see many having 5 min matches let alone winning them all.

If you only had a 33% win rate and it took an average of 12 minutes per match you would already exceed the length of the weekend event to get 200 wins. While I would consider that to be a bit of a worst-case scenario. We can see how slow and not attainable for most reaching that max win count becomes.

Not to mention this is just a weekend event. If you are not sleeping just to win some card packs even though the top tiers are worth quite a lot depending on what you pull once trading is opened. You might have a slight addiction issue and will face burning out in the medium term as well. I myself prefer to play these in a manner where I could enjoy it for years to come. 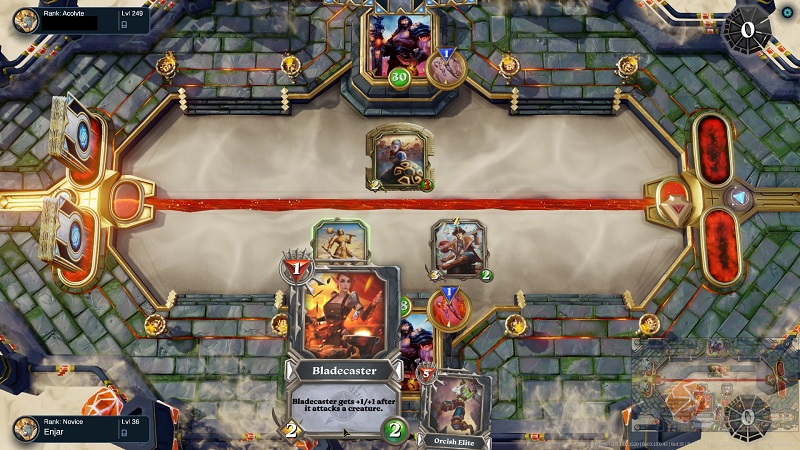 This was the fun part for me during this whole event other than getting some cards. Since this is a ranked event you could face some crazy decks that have not moved up yet. In theory, they should have been able to crush me. This should have been even truer since I was playing the f2p War deck and a returning player as well.

It took me a of couple matches to get back into the swing of things again. There is quite a fair amount of synergy between cards that you have to work out and learn what combos go well with each other. Not to mention finding the god power that works best for your playstyle and the cards you have. 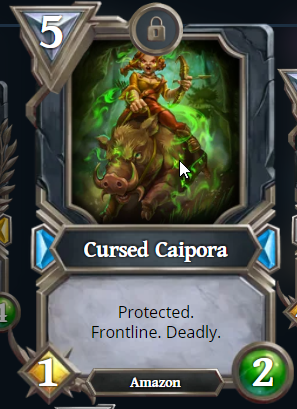 The god power onslaught for War I really love playing with as well. Being able to have a card you just placed down attack even if they don’t have that ability naturally is quite awesome. So many games I would sit on a card like Cursed Caipora just so I would have a way to clear anything nasty that pops up. Even better when you can get a win from the player smashing that conceded button after it happens. 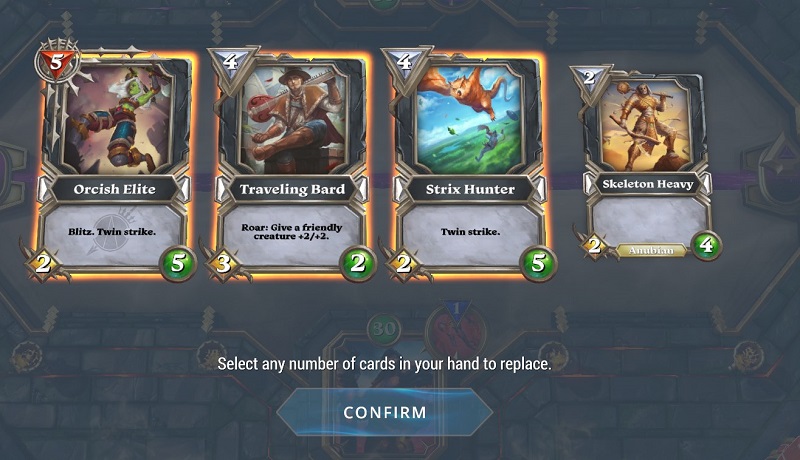 I also noticed quite a few players even the higher-level ones either were getting really unlucky with the draw or were not being aggressive enough with replacing cards at the start. Even when faced with a mirror match. Players seemed to want hold onto the clutch cards while letting me wipe the floor with them. I prefer to have things I can play on turn 1, 2, and 3 if possible.

While others want to have those big cards and by the time they play them there not much health left to take out. Not to mention by that time I’m usually holding something with lethal or have another way to counter anything big they were holding for way too long.

Always kind of funny seeing someone with a hand full of cards they are not playing. With them, in the end, hitting the conceded button or walking away and making me wait out the timer for my next turn to attack and finish the game.

In the end, I had 50 wins and made it up to Rank Twilight Shadow. This means I’m going get 3 core packs when they award them midweek. While nothing special and since they are core packs they will get wiped at the end of beta. I had fun and maybe I’ll get a needed card out of them so I can make my own deck and get further next weekend.

Best Pull Over The Weekend 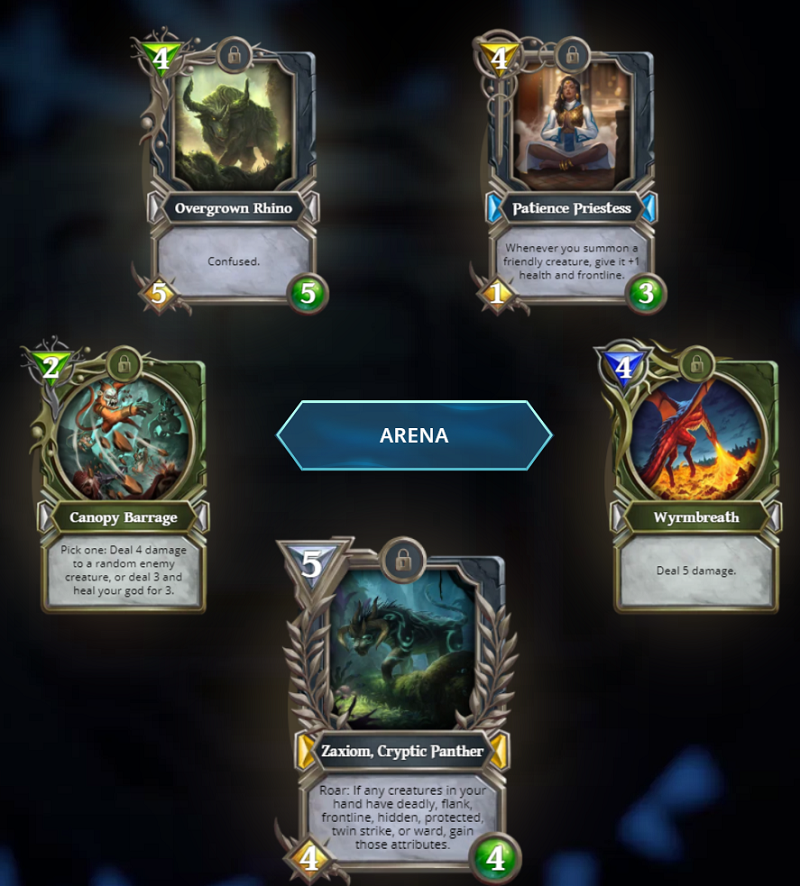 From all the levels I got over the weekend I had a few core packs to open. Where I managed to pull a Zaxiom! While I lack enough other cards yet to be able to use it I should have some fun in a War deck at some point with it.

What is really cool about that card is it gains abilities dependent on what is in your hand. Most importantly deadly, frontline, and twin strike to name a few. This more or less makes your card be a tank that has to be targeted first, will one-shot anything not protected and can attack twice in one turn if it gets all those abilities.

This is a core card so it can’t be traded which I am more than fine with. I really like the idea of there being a core set all players get to earn from playing. I think it gives everyone a nice base to build up and create some common ground for all players. Long term these games can have so many cards it can become quite intimidating for those who don’t play often to understand what is going on. 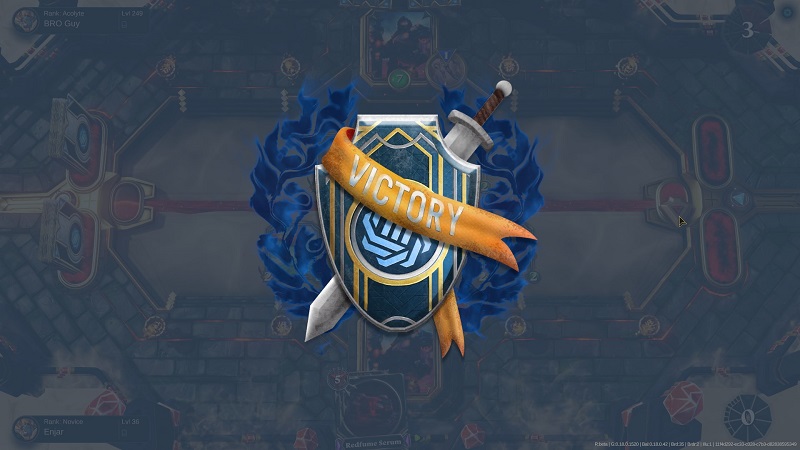 Weekend events like this are always fun to play in. They just help break up whatever normal grind there is in a game and make it feel special. On top of that during the week I can work on my rank a little bit if I like.

I also really want to grind out some levels in the coming month so I can make my own deck and move away from the predictable starter decks. I have gotten a couple of cards so far that look fun to play in a deck. Part of the fun in a game like this is making a deck or borrowing ideas from another to come up with something interesting and fun to play.

Screenshots were taken and content was written by @Enjar about the game Gods Unchained. The game is in early access at the time of writing this.

Feel free to use my beta invite key (referral link). This helps support me and shows actual interest in this game which helps determine how much content I will be making for this game in the future.