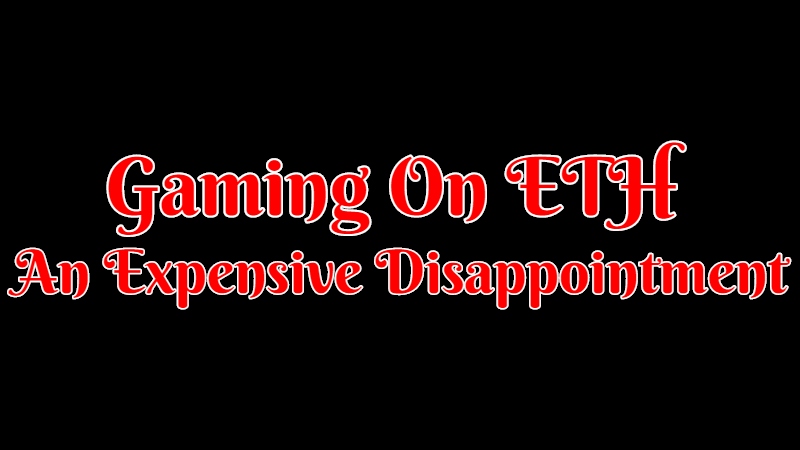 Quite a few games on ETH these days are being choked to death by gas fees. The players don’t want to pay the fees to be able to play them. The developers are having to find ways to raise more funds or reduce costs just to stay afloat and pay the gas to send items. Why is everyone suffering so badly for ETH? It’s quite simply they lust for smart contracts that are not being used reasonably.

If you can’t tell by now I’ve been growing rather unamused by the high cost of trying to game on the ETH blockchain for what is starting to feel like the better part of the year. I’ve watched a number of my gaming assets some decently rare fail to find buyers even at reduce costs and are not even worth the cost to relist at this point.

There are a lot of games out there that are not optimized very well for dealing with a high gas fee. On one end you have endless frivolous transactions some games want to broadcast on ETH. On the other end, some games don’t want to broadcast anything at all unless you pay a special minting fee which is the only way to even sell those items for ETH otherwise you are stuck in that games ecosystem with no other cashing out method.

I think when a game costs more in gas to play than the actual game itself dose that is a major failure of the game developer and they should rethink some things. When facing these hard times they should be looking to reduce non-financial yielding actions that are being broadcasted.

In some cases, games have you do an RNG roll. Where more times than not you get nothing at all or the item itself is worth cents if that. The issue comes in with some games wanting that role to be a transaction on the ETH. They are using smart contracts to determine the outcome and it’s just costly for everyone involved.

Even when you do get a hit and now to have an NFT you just paid double the gas fees in acquiring that item than if it was a non-success and item found roll. Some games out there seem to even be counting on gas costs adding “value” to their items as a player would not want to sell at a loss 99% of the time. Expect no one is even playing those games and those items are now disintegrating in price.

Not to mention a lot of these items have bulky smart contracts. I’m talking about the full TOS (terms of service), multiple user agreements, and other bulk in them. It’s no wonder ETH is being bogged down. You just have to look at the top gas guzzlers overall even outside of gaming to see the concept of a light smart contract is beyond reality in most cases.

Instead of just some fat trimming to reduce playing costs to the player some games are going with the nuclear options. This could include zero items being broadcasted on ETH and those items are no longer true NFT. Even worse those games only allow you to sell your items in-game for that games token that is only used in-game. If you want to sell that item for anything else like ETH you have to pay a massive minting NFT fee and then list that item at an external exchange.

Many games are also leaving ETH. Are they coming over to Hive? Not that I know of and many people have suggested it to a couple of games. They just want their smart contracts and gas fees. If gas fees choked out your game on one blockchain how is it not going be an issue on another one day? Some actual changes would be needed.

In one instance I assume the blockchain in question was an ETH fork or a clone of some information. You can use your same private keys and all of that. First, you just need to buy there token on ETH and pay a gas fee. Then you need to pay another gas fee to transfer it to over to that blockchains wallets with some kind of conversion. You then can use that blockchains coins to pay the gas fees they have. Geez that a lot of gas just to pay gas and wtf? Hard pass from me.

You also have a lot of projects where they seem to have just gutted every staff member they can. I would not be shocked if many games on ETH are just down to the current owners and no further staff members. Lots of people announcing in different games that they are “leaving” the project to go work on something else. No one seems to want to use the words “we let go all our staff” but that is what it seems like.

You even have games doing everything they can to get people to spend. Everything from taking pay to win options and tripling or great item stats, amounts offered, and lots of add-ons. You even have game developers sending out announcements that if spending does not increase the game will shut down and trying to allude to the fact all those assets you have would have no use then.

Then you have some projects moving out of ETH sidechain (or whatever you would even call them) where they are paying both that blockchains coin and reduced ETH gas fees to just being on ETH. I don’t know enough about them to fully understand the strangeness that are those kinds of things. I can only guess it was a way to try and have transactions on ETH to some degree but when the next ETH fork comes out they will end up still needing to pay that sidechains gas fees regardless so they appear trying to get ahead of things.

I had several ETH posts I’ve yet to publish or was planning to do some follow up posts on games I’ve already talked about. Some are somewhat written in various unfinished states waiting for some kind of conclusion so I could wrap them up and publish them. Other games I thought I should just play them in the meantime (months ago) so I can write on them later (to late now.) Now many are just disasters of a shell of games remaining if at all and a bunch of wasted time on my part and expense playing.

To say I’m disappointed by the lack of innovation by a lot of games out there on ETH is an understatement. Some of those games have as many players remaining as they do developers. Bag holder could not even dump if they wanted to without taking further losses greater in the cost of gas than those assets are selling for.

I think I’ve even had stuff up for 6 months now in some cases and I’m not even going bothered paying gas fees to delist as those assets are not even worth that cost of doing that. Sure I could have paid 6 months ago to make them a “warped” asset and made it cheaper for myself and the buyer but that ship has sailed. Not to mention I would want actual ETH, not a promise of being able to redeem for it during these crazy times.

It is just tempting to only want to play blockchain games on Hive. Every time I go elsewhere it ends up being a disappointed riddled with issues and frustration. While I never expect to get rich or even make my money back in most cases when playing blockchain games out there. I also was not expecting gas to be a nail in a coffin for me either.