When it comes to gaming the last place I thought I’d find a game I’d enjoy would be on Discord itself. While sure a lot of gamers can be found on Discord. Most of the games I’ve found are usually not something I see myself playing for months on end.

Even odder this game's main theme is battle royale. That is the kind of game I rarely talk about as I just don’t enjoy that kind of genre a lot. This was however quite different. Not only could the match have over 1k players in it. You did not need to be around when they started.

The main Discord server for Rumble Royale itself has a couple of different kinds of battles going on. You have those that are consistently running every few minutes that are started by the players themselves. You then have the auto battles that run hourly, after a certain amount join them, or even weekly. 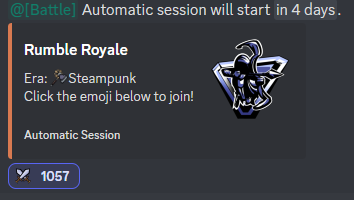 Even more shocking all you have to do as a player at a bare minim is click on the fight emoji to join and that is it. It does not matter if you have been playing the game for months and have all the in-game unlocks or are just a fresh player. Everyone has an equal chance to win.

This game also seems to solve an issue a lot of other Discord games have. When you have too many players in other types of games trying to play the same game in the same couple of Discord channels. It can be hard to follow along with what you are doing individually. 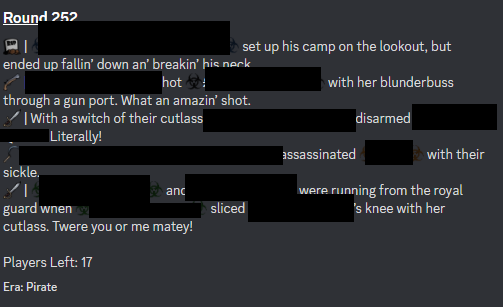 Rumble Royale on the other hand once the battle starts it’s all automatic. You have zero input on that battle's outcome if you win or lose. A bunch of people is not trying to spam the same Discord channel fight each other and keep track of what is going on.

Depending on the number of players in the battle it might only go a couple of rounds or hundreds. You don’t even have to be there live as it happens; although, it can be a quite fun reading of the deaths and hoping you don’t get knocked out in the first few rounds.

Quire a few deaths in this game are also quite amusing in their way. They can be as simple as another player opening the door for zombies to eat the other player. To things like doing something really stupid and losing the battle before even running into anyone.

The only impact you as a player can have is if you have a bunch of unlocks of cosmetic skins, titles, eras, and phrases. None of these gives you an edge in the game either. It just makes things far more interesting. While a lot of the short-term fights might only pay out 600 to 1k gold coins. If you win that weekly with 1k+ players that is a cool 50k gold. I however rarely join those fights or am even active in the main Discord for this game. With any gold you win then you can buy bags or special skins out of the shop. 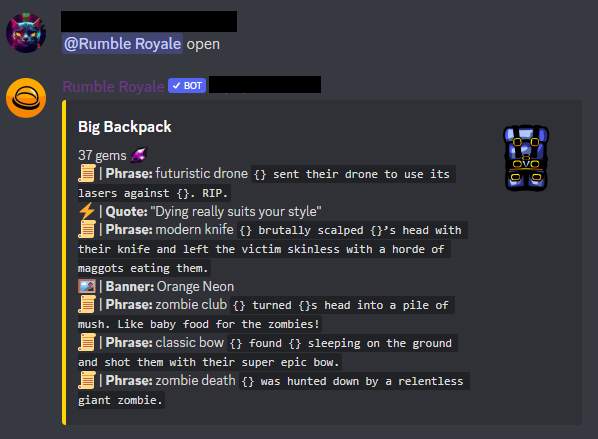 I find the best value per gold spent is on the big bags for 40k gold. That usually takes a lot of smaller battle wins to be able to afford one. You can see however I got a lot of stuff out of just one of them.

You can see from that one bag I picked I unlocked quite of phrases for different types of battles. The next time I join in on a zombie-era battle if I got killed I have a chance of being from a “relentless giant zombie.” Sounds like the typical situation I would find myself in.

On top of that, I also got a new quote. Selecting a quote you have unlocked and picked to be used will be displayed at the end of a battle if you win.

I even got myself an orange neon banner to display if I win as well. I however rather keep the one I already have selected.

You might also notice I picked up 37 gems and with 100 of them I can buy an era-specific backpack that I have unlocked. I can also spend them on item skins.

That is the other thing to note. If you don’t have an era unlocked yet you are not getting anything for them when opening up a bag. So when you are just starting you are getting only stuff for classic.

The good news is you are not required to have an era unlocked to join the battle. You only need them if you wish to start a battle yourself using a specific era.

There are other things you can get out of a bag. Such as getting an era-specific backpack and saving yourself 100 gems. Along with item skins which I have found are a bit harder to come by.

The big thing for me for quite some time however was getting era unlocks from opening bags. You see I was mostly playing in a smaller Discord and I wanted all the eras unlocked. That way when I started the battle at random there would be a wide range of eras it could be.

Playing in smaller Discords is also where I feel this game shines the most. Getting a giant win in a big server where you don’t know anyone despite how much gold you win is not the same as beating a bunch of people you know.

Not to mention even if you lose just maybe you took out someone important in that smaller Discord server. In such a way there can be some side banter for fun. 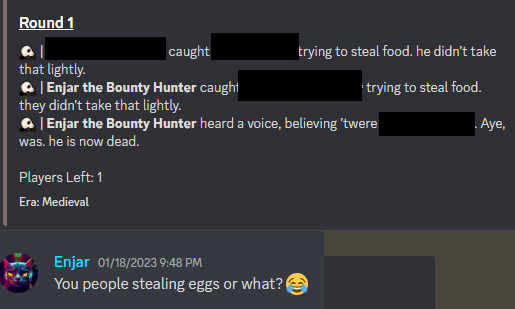 I find that side banter to be what a lot of Discord games out there are lacking. The social aspect of these games keeps you coming back for more. These battles are also usually short and sweet. Since they don’t have any real skill invoked and you have to do very little to join in.

It’s just something quite easy to do during a busy day. Then later you can come back and see what transpired. Join in on the next battle and maybe poke some fun at the way people went out while you are at it. Quite a lot of laughing to be had even at your own expense when you get taken out strangely. There is however a benefit to playing in the main or special large Discord servers beyond just more gold per kill or wins. You also get experience with the current Rumble Pass. The game is going to be getting a new pass soon.

In these Rumble Passes, you can get bags and other items for progressing through each tier. It is also the only way to get whatever the current new era is. Making it something quite a few players will grind for. 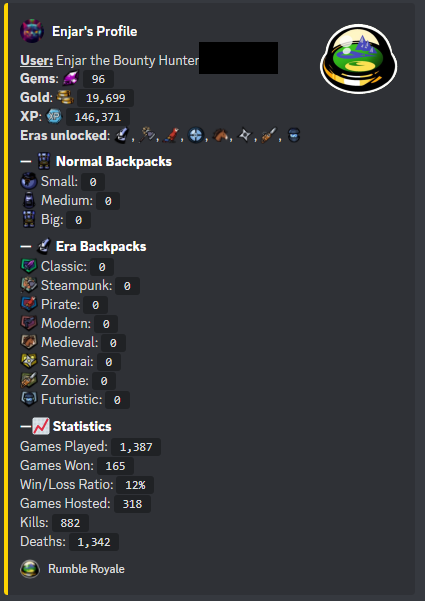 It was also the only reason I even grinned as I did in the main Discord. It helped me reach my goal of unlocking all the eras and quite a few phrases. Even since playing this game back in October. Getting 882 kills across 1,387 games. I still have a lot of phrases to unlock.

For now, I get to enjoy playing this back in the smaller Discords that I’m in that run it. Such as End Times Revelations that I sometimes talk about on Twitter. Till the next Rumble Pass gets released and then I’ll be back to square off against giant hordes of players on the main server for some nice rewards.

Screenshots were taken and content was written by @Enjar about Discord Rumble Royale.