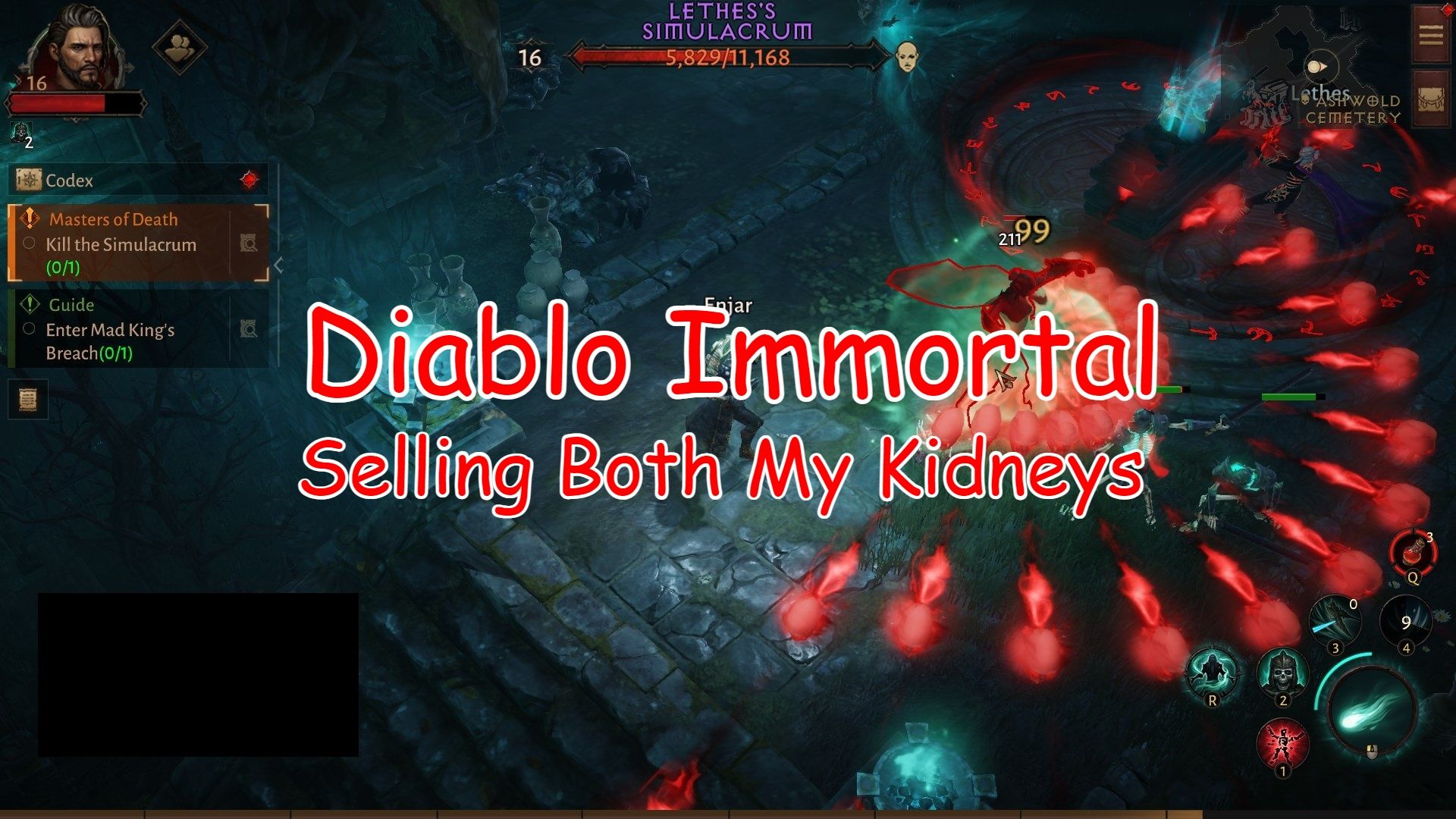 With how massive the hate train is for Diablo Immortal I thought I would check it out myself. I’ll be aiming to remain free to play or a budget player at best. I’d rather keep both my kidneys as I put them to heavy use in a given week as it is. 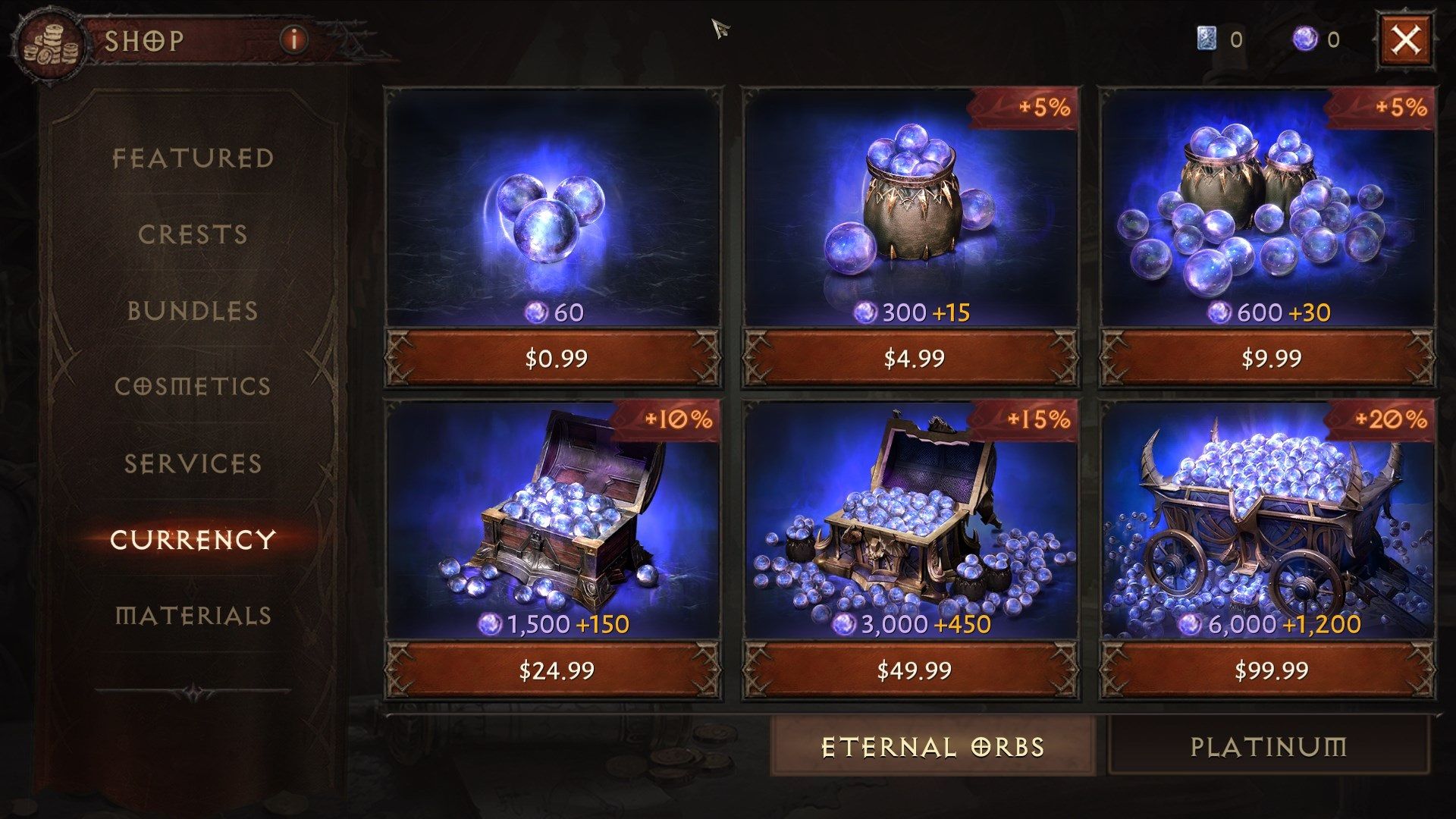 I’m going to approach this game as a pay-to-win (P2W) before I even get into it. This tends to mean my fun is finding a budget or free way to enjoy the game and if I can sometimes make a whale feel like they wasted a lot of money along the way. That is just extra gravy.

With that in mind, I ahead of even downloading the game set a hard limit on my spending. With these kinds of games, you need to be careful to not impulse buy and way overspend. For the first 30 days, I set a small amount till I understand what has value and what does not. Beyond that, I might treat this game as if it had a monthly subscription. Some of the monetizations they are doing make it feel that way. They have some “30 days” packs and other options I could end up going with on my second month if I end up lasting that long.

While I’ve tried to stay away from finding out too much about the game. With all the news around it, there are just some things you end up finding. It seems many take issue with the PvP aspects. In a game where someone can large sums of money like it’s nothing and they are not just loading up on cosmetic items and bank slots. I fully expect PvP to never even be close to “fair.”

With how new the game is I do expect after some time that the rating system for their PvP will end up putting whales more often than not against each other. While the lower spends end up getting into their groups.

With that said some games nowadays do set up their rating systems to put spends vs free to play. If that end up being what is going on here it needs to be fully called out. I have not dug too much into that yet let alone played a single PvP match. So I do not know at this point.

PvP is never my thing in gaming. I just don’t care for it. That part of this game unless they're some kind of reward worth chasing after I might end up ignoring for the most part. 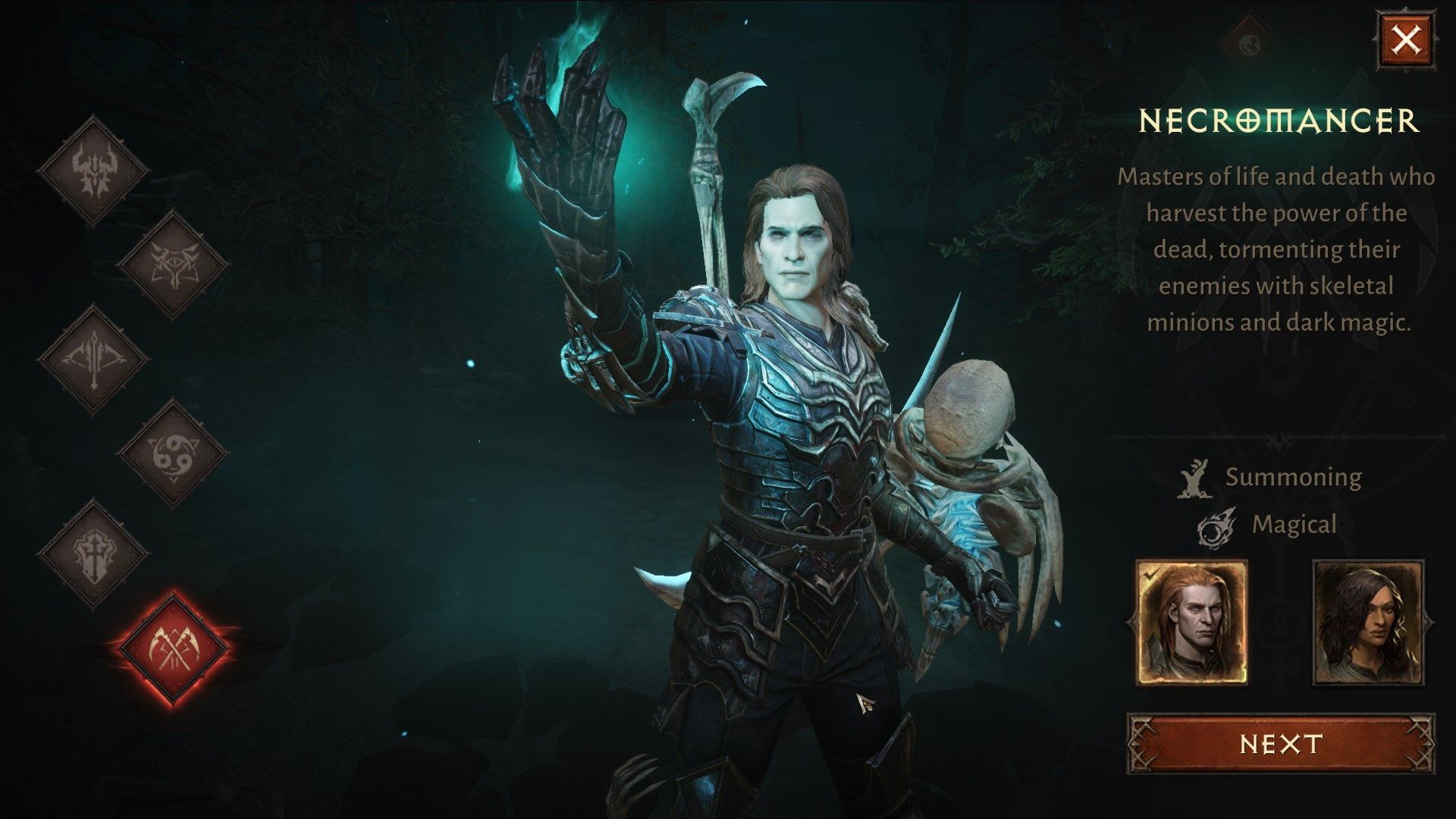 I’ll be starting as a necromancer. Using the undead and the dark magic of a game always sounds like a fun time. At some point, I’ll be trying out some other classes as well. Playing something like a Barbarian spin to win would take me back to my Diablo III days.

While the game can be played on a mobile device. That is not how I game. Thankfully they have a PC version of it as well. I feel having the mobile and PC divided of gamers clashing into a single game that is set up like a mobile payment to win with how different the two cultures of gaming are you can expect quite a lot of hate.

It’s great to see the game started with six different classes to choose from barbarian, crusader, demon hunter, monk, necromancer, and wizard. With them not being behind a paywall to at least be selected. I do hope in the future they add in more classes and they are also free. There are some more exotic classes in Diablo I’m sure many fans would love to be able to play. 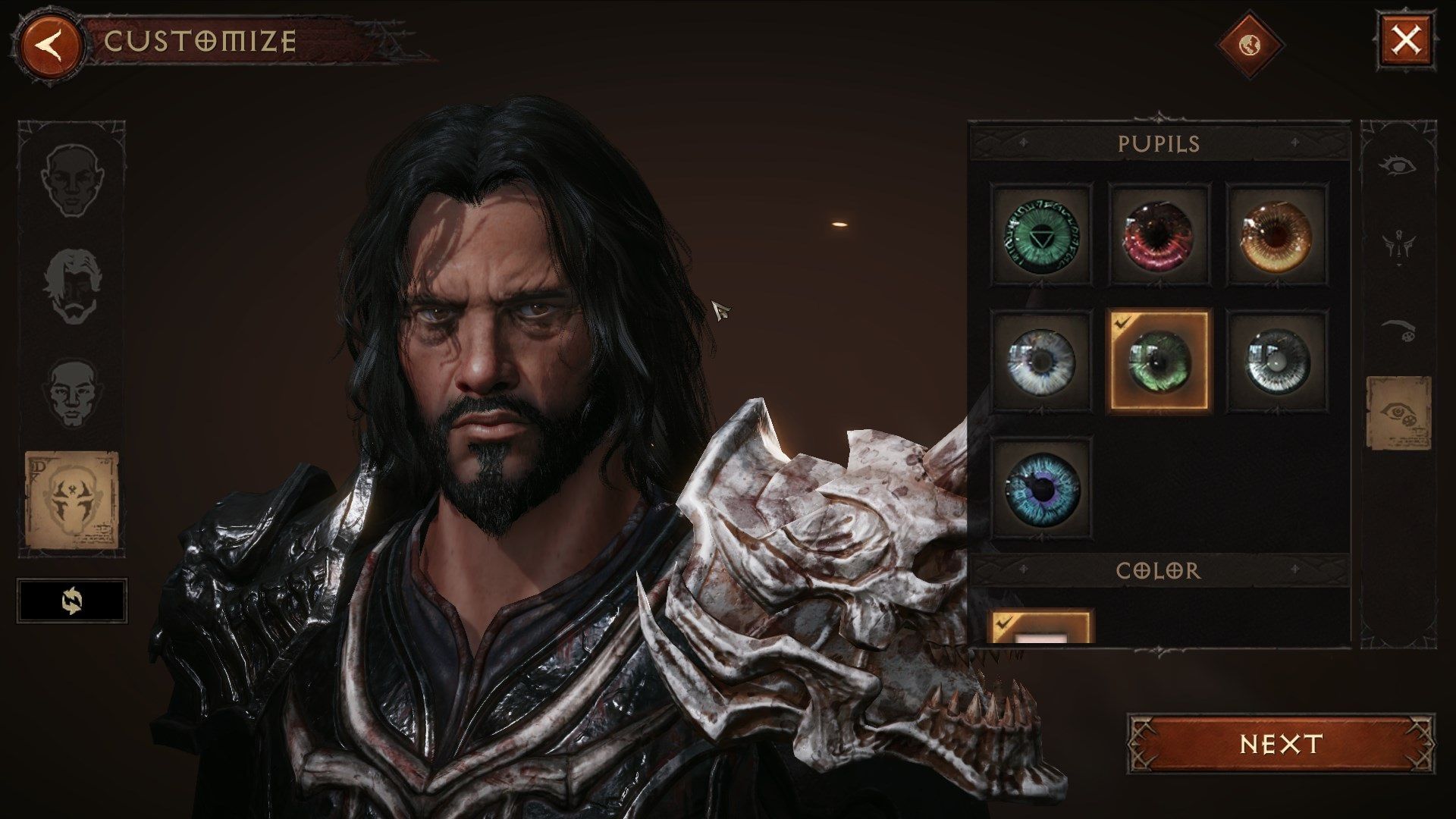 I found the level of options I got to pick for how my character looked to be decent. You had a couple of different options for hair, beard, colors, height, and the usual stuff. Having seven different pupils to choose from when I’m only ever going to see my character eye on the selection screen felt like more than enough for me.

They had a lot more options than I was expecting coming from a mobile game. While sure some insane technologies are coming out for character customization in the “near” feature for PC gaming. For it is a “free to play” game that seems fine for what they have.

One of the biggest annoyances of pay-to-win games that I tend to see when I play browser games is the endless barrage in the face of pop-ups and pinned on-screen glowing boxes trying to get you to spend money on the game. I’m hoping they are not doing that or at least keeping it to a minimum. It’s time to find out. I felt they had a decent amount of explaining and going over a few different things. Some games tend to leave you entirely alone to wander in the dark hoping to work things out. In my first couple of hours of play, I was occasionally getting a quick tutorial style of information. Early on there seemed to be some decent fun encounters. I did feel my movement was a bit clunky. I do believe that was mostly due to a lack of movement skills to get out of the way of things. Other times however it was clear my character was getting stuck on something or I was bumping some kind of invisible wall. The game was doing so well for a short while. Then I got to level 11 and there was a popup that I could hover over for more information. It revealed I had a one-time bundle I could buy in the store. I half expected these kinds of “deals” would be presented at some point. I’m at least thankful it’s not flashing, and not taking up a large amount of screen space. It also went away after checking out what the deal was. It did not take long for another one of those one-time deals to show up. At least they are not going heavy into impulse buying with a countdown timer and other nonsense to add pressure. They are trying to sell you on the idea of “value” by including a percentage based on the package's “deal.”

You got to be careful when encountering such things. The first pack that was offered that has 800% is trying to sell you some perineum currency for the same price you can just go buy normally with the 800% coming from a cosmetic included. While the 570% pack had more actually useful stuff in it and looked like a much better deal. I however bought neither of these. Like Diablo III they have a rift system. This is where things start to go downhill fast for this game. They start you off by giving you “free” empowerment crests that guarantee certain things to drop. While it seems like they might spoon-feed you some free ones from time to time (only guessing at this point.) They also want to sell you some using perineum currencies you can buy in the cash shop. 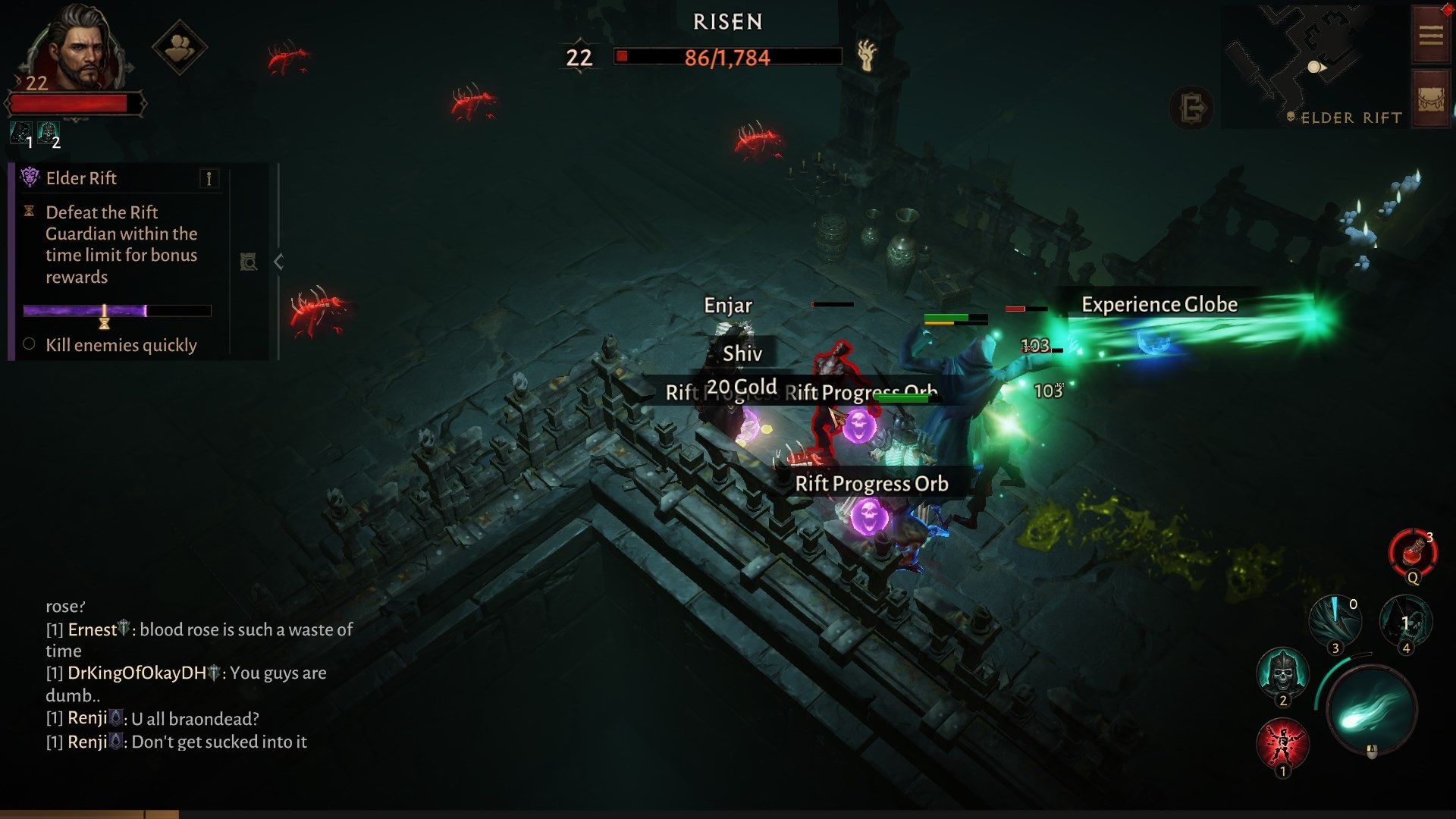 The rift itself otherwise had many of the same hallmarks you would expect to have. You have a clearing timer and magic or rare creatures dropped globes you collect for a boost in progression. Like a lot of things, however, since it is a mobile game it was quite a short rift.

I was also not that impressed by the loot explosion at the end when I defeated the boss in time. If you could even call it a loot explosion in the first place. Four magic drops and a legendary gem drop rank II that you get for using the pay to get a random gem drop now feature. Out of everything I found how the in-game map system looked to be amazing. The rest of the graphics for this game are not so much since I am a PC gamer. Though the graphics were a lot better than I would have expected for a mobile game.

A lot of the zones and dungeons I have encountered so far felt quite small and short. I ran into quite a few loading screens as well. When inside a couple of dungeons I would sometimes only have two screens worth of movement before hitting another loading screen in some instances. If the dungeon was even bigger than a single room in the first place.

There also seem to be a lot of little things you need to log in daily for. This is something I’ve seen in-browser games. You log in and get a free reward chest, you go do something easy you get some more rewards, and so on. It will be interesting to see how that expands the higher level I get and the more things I unlock over time. 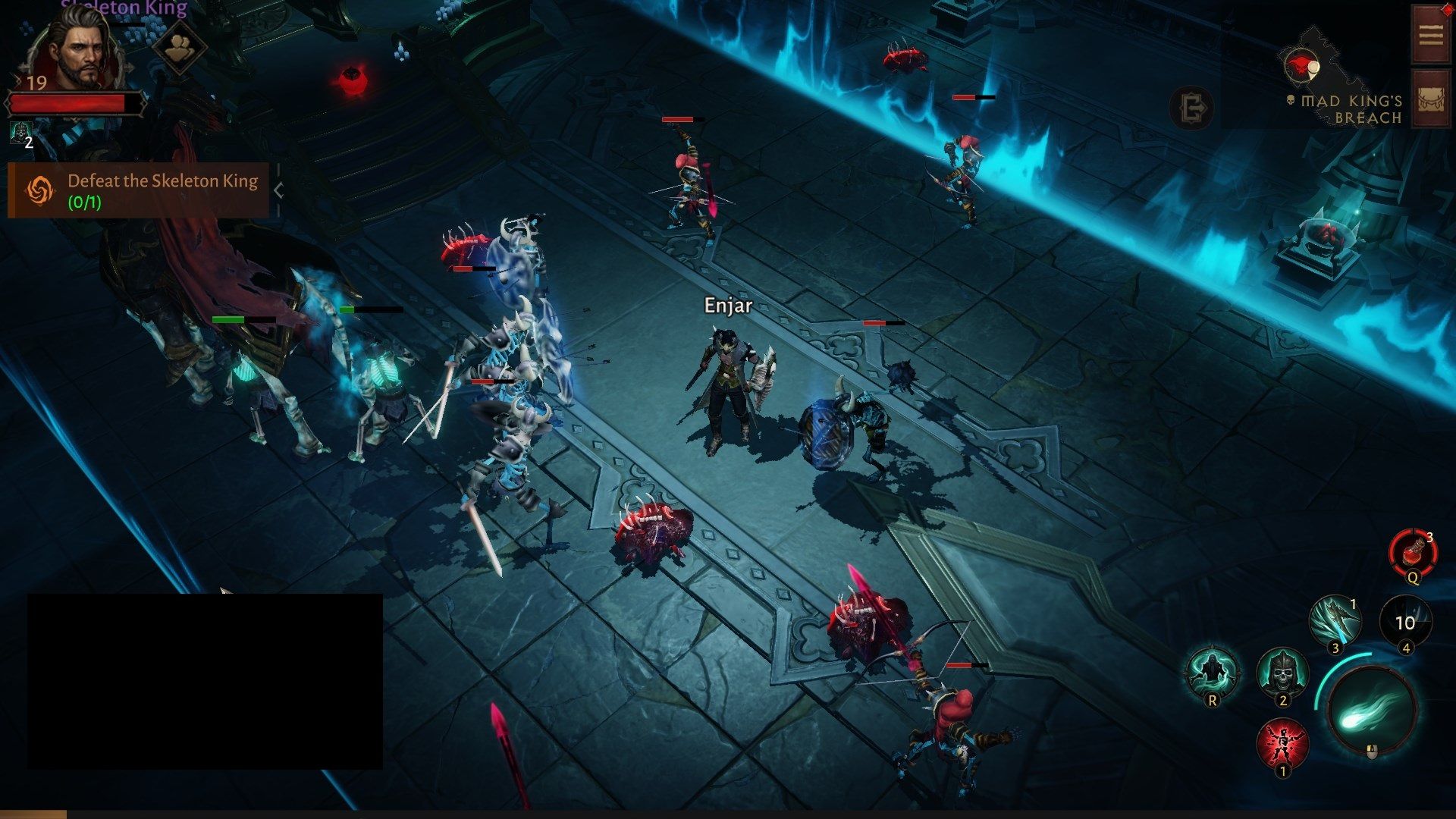 My first impression of Diablo Immortal is I’m getting a dumb-down version of Diablo III. Expect some things that have a higher drop rate in Diablo III are nerfed in Immortal unless you want to pay extra for a boost. Meanwhile, some items seem to be on the pay-to-play only menu or so rare it might as well be.

The biggest downfall for me regarding Diablo III was the lack of real updates. They tried to put out some not-so-great DLCs. Something tells me if whales are going whale-like they've been in Immortal at least it should be receiving quite the hefty update and new content along the way.

If I end up being able to enjoy the game as a free-to-play or extreme budget player and there ends up being a lot of content every so often. That could be great. However, I have not played enough to see how time-gated and restricted being a lower-end player is let alone the grind. That would easily make this game not worth playing long-term.